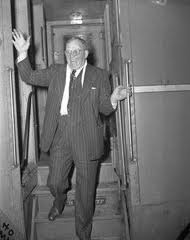 ~Andy Lotshaw 1880 (Cubs Trainer 1922-1952)
Andy was the Cubs trainer and also served in the same capacity for the Chicago Bears. Andy actually played an important role in the career of Cubs pitching great Guy Bush. Bush was one of the mainstays of the Cubs pitching staff during most of the 1920s and the early 1930s. He won double digit games in nine seasons in a row (including 20 wins one year), but was really best known for his incredible endurance. He was always among the league leaders in games pitched, and often served as the closer between his starts. During his Cubs years he pitched an amazing 2201 innings and completed 127 games. The rest of the league wanted to know what his secret was, but Guy Bush would never reveal it. There was a very good reason for that–he didn’t know what it was. Cubs trainer Andy Lotshaw applied a “secret dark liniment” to Guy’s arm, and Guy was convinced that liniment was what kept his arm loose. Andy wouldn’t even tell Guy what it was. It wasn’t until the Cubs traded Bush to the Pirates in 1935 that Lotshaw finally admitted the ingredients of the secret dark liniment to the pitcher. It was Coca-Cola. (Photo: 1946)

~Jumbo Barrett 1899 (Cubs 1923-1925)
Barrett was mainly a backup infielder in his three seasons with the Cubs, and he wasn’t a particularly big man. He stood at 5’11” and weighed 175 pounds, but his teammates all called him “Jumbo”. He may have been nicknamed after the grocery chain Holland & Barrett, which sold a Jumbo Roll.

~Bob Borkowski 1926 (Cubs 1950-51)
The son of Cubs scout was an umpire in an Army pickup game during the war and recommended Borkowski to his pop. Bob played quite a bit as a reserve outfielder in his rookie season of 1950, and was traded to the Reds along with Smoky Burgess in 1951. The Cubs lived to regret that trade. Burgess played in the big leagues until the late 60s.

~Jesse Hollins 1970 (Cubs 1992)
He made four appearances for the Cubs out of he bullpen after being called up in September, and was hit hard. He hurt his arm the next season and never made it back to the big leagues. On July 9, 2009, Jessie passed away at the age of 39. His body was found floating in a lake, apparently the victim of a fishing accident.