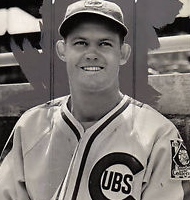 ~Rip Russell 1915 (Cubs 1939-1942)
He real first name was Glen, but Rip Russell was known for being able to rip line drives. He also came to the Cubs just after another first baseman named Rip Collins played for the team, so it was only natural that his teammates started calling him Rip. Russell played for the Cubs for four seasons, but his best season was definitely his rookie year of 1939. Filling in for the injured Phil Cavarretta on the defending NL champs, Rip knocked in 79 runs, good enough for second best on the team. He spent the rest of career as a bench player, first with the Cubs in 1940-42, then after a stint in the military, with the Boston Red Sox in 1946 and 1947. Rip died at age 61. R.I.P. Rip. (Photo: Rip in 1939)

~Kevin Blankenship 1963 (Cubs 1988-90)
Blankenship was acquired in the trade that sent fan favorite Jody Davis packing in 1988. He pitched a total of 23 innings over three seasons with the Cubs. Blankenship was a member of the division winning 1989 Cubs, although he only pitched 5 1/3 innings for them that season.