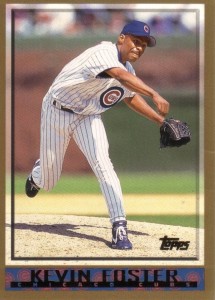 ~Kevin Foster 1969 (Cubs 1994-1998)
Kevin Foster was born and raised in the Chicago area, so it was a dream come true when he came to the Cubs in 1994. He had his ups (a 12 win season in ’95 and a 10 win season in ’97), and downs (he had trouble giving up the long ball) with his hometown team, but Foster was a popular player because of his positive attitude and his happy-go-lucky charm. After he hurt his arm in 1997, he was essentially done in the big leagues outside of a brief stint with the Rangers in 2001. In 2008 he was working as a truck driver when he was diagnosed with renal cell carcinoma, a very powerful cancer. He died only six months later at the age of 39. (Photo: Topps 1998 Baseball Card)

~Steve Mesner 1918 (Cubs 1938-1939)
The third baseman was only 20 years old when he got the September call up to play for the pennant winning Cubs, but on a team stocked with talent, he didn’t play much. He later got a full-time third base job for three full seasons during the war with the Cincinnati Reds.

~Mike Tyson 1950 (Cubs 1980-1981)
The second baseman didn’t have the greatest Cubs career (he hit .238 and .185), and he cost the Cubs a prized relief pitcher named Donnie Moore to acquire him, but Tyson had something that Moore could never quite pull off. He had a hell of a mustache.

~Jose Nunez 1964 (Cubs 1990)
Jose started his professional career in the American League with the Blue Jays, so he wasn’t accustomed to batting. He was more than just a novice. He literally had no idea what he was he doing. Sports Illustrated wrote about his first spring training at-bat in 1988…

Jose Nunez stepped in against the Phillies’ Kevin Gross in an exhibition game in Clearwater, Fla. Before Gross could throw a pitch, the third base ump motioned for Nunez to take off his warmup jacket. Then Nunez returned to the lefthanded-batter’s box and was told by plate ump Dave Pallone that he was wearing a righty’s helmet—the earflap covered his left ear rather than his right, which faced the pitcher. So Nunez turned the helmet around on his head and wore it catcher-style. No, no, said Pallone, get a lefty’s helmet. No, no, said Nunez, who moved across the plate to bat righthanded. When Gross began his delivery he saw Nunez bent over the plate, looking back into catcher Lance Parrish’s glove. “What are you doing?” asked Parrish. “I want to see the signs,” said Nunez. “O.K., what pitch do you want?” “Fastball.” A fastball it was, and Nunez lined it foul. He turned to Parrish and said, “Could you make that a changeup instead?” At that, Pallone doubled over in laughter, and Gross needed a few minutes to compose himself. Finally, on a 2-2 count, Nunez grounded out to short.

He got his first big league at-bat with the Cubs in 1990. It wasn’t quite as embarrassing, but it certainly didn’t lead to a hit. In his 15 big league at-bats, he got one hit, and one walk. Of course, he was a pitcher, so he would forever be judged by his pitching performance. That didn’t go much better. He appeared in 21 games for the Cubs, pitched 60.2 innings, and posted a whopping 6.53 ERA.