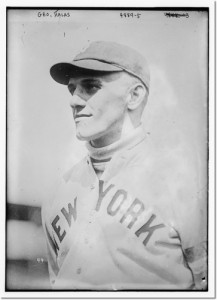 ~George Halas 1895–1983 (Cubs fan 1900-1983)
Growing up in Chicago during the Cubs championship era (the first decade of last century), George Halas was a die-hard Cubs fan. When he was a boy, he and his friends used to hang around the player’s entrance at West Side Grounds and wait for Frank Chance to show up. When he arrived, the boys would beg the Peerless Leader to let them into the games for free. Chance obliged them on several occasions, something George Halas never forgot. Halas later became a baseball player himself. A month after World War 1 ended, he signed as a free agent with the New York Yankees. He eventually made it to the show for part of the 1919 season, but an injury ended his career after only 22 at bats.

The next year the Yankees had another right fielder; a little known fella with the last name of Ruth.

Halas obviously also excelled at football, and was one of the founders of the National Football League. He patterned the team colors after his college team (the University of Illinois), but he named them “The Bears” as a tribute to his favorite baseball team: The Chicago Cubs. Halas’ Bears even shared Wrigley Field with the Cubs for nearly 50 years. George Halas is a member of Pro Football’s Hall of Fame, and Chicago Bears fans will always revere him for his incredible success. But never forget, George Halas was a Cubs fan even longer.

~Ted Tappe 1931–2004 (Cubs 1955)
He was part of the ill-fated Johnny Klippstein trade with the Reds. Tappe played the first few months of the 1955 season before being sent down to the minors by the Cubs. He never returned. His Cubs career consisted of 50 at bats.

~Warren Brusstar 1952– (Cubs 1983-85)
Warren pitched out of the bullpen for the Cubs for three seasons. His first two were excellent, and his third one was so bad it became the last season of his big league career.

~Pat Tabler 1958– (Cubs 1981-1982)
He was involved in the same trade that brought Warren Brusstar to the Cubs, though neither of them were the main bargaining chips. The Cubs acquired Steve Trout in that trade, and the White Sox got Dick Tidrow. Tabler ended up playing in the big leagues for 12 seasons, and won a ring with the 1992 Blue Jays. His nickname was Mr. Clutch.

~Paul Kilgus 1962– (Cubs 1989)
He was part of the trade that brought Mitch Williams to the Cubs (at great cost–Rafael Palmeiro and Jamie Moyer went to the Rangers). Kilgus and Williams both contributed during the Cubs division winning season of 1989. Kilgus threw three shutout innings in the series against the Giants, one of the few Cubs pitchers who pitched well. Even Greg Maddux was lit up by the white-hot Will Clark.

~Ronny Cedeno 1983– (Cubs 2005-2008)
Ronny filled in nicely for Nomar Garciaparra when he was called up as a rookie, and got the starting job the following season, but he couldn’t get on base. He managed only 17 walks in over 500 at bats in 2006, the worst ratio in the entire league. He has managed to stay in the big leagues thanks to his glove, however. 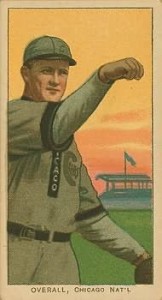 ~Orval Overall 1881–1947 (Cubs 1905-1913)
Orval was a key member of the Cubs dynasty of 1906-1910. He was a two-time 20-game winner, and led the league in shutouts (twice) and strikeouts. For 108 years his claim to fame was that he was the last pitcher in Cubs history to win a World Series-clinching game. He won the deciding game of the 1908 World Series. (That honor now goes to Aroldis Chapman, who ironically served up a homer to tie the game, but got the win in Game 7 of 2016 World Series). Orval wasn’t much like the other guys on the team–he was a college boy who attended the University of California at Berkeley, where he was also an All-American football player. He pitched some of the greatest games in Cubs history, including two wins in the 1908 World Series. In one of those games he struck out four men in one inning–something no one else has ever done in the World Series since. He also started Game 1 of the 1910 World Series before being chased away from baseball by Cubs owner Charles Murphy during a contract dispute. He eventually returned to the Cubs with hat in hand in 1913, but by then, his time had passed, and he only won 4 more games in his career. (Photo: 1909 Tobacco Card)