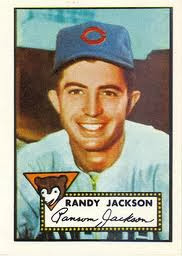 –Randy Jackson 1926–2019 (Cubs 1950-1955, 1959)
His real first name was Ransom, and gosh darnit, he was kind of handsome, so his teammates began calling him Handsome Ransom (His teammates thought he looked like Gregory Peck). “Handsome Ransom” Jackson was one of the best players on the Cubs in the early 50s; a National League all-star third-baseman in 1954 and 1955. He hit 19, 19, and 21 homers in 1953-55 (his three seasons on the Cubs), and was a pretty good fielder too. (In 1955 he led NL third basemen in double plays.) His greatest day in a Cubs uniform was April 17, 1954 against St. Louis. Jackson had four hits – including a home run that hit an apartment building on Waveland Avenue. With the wind blowing out at Wrigley Field, the Cubs beat the Cardinals 23–13 in a National League record (at the time) three hour and 43 minute game. The two teams combined for 35 hits — including five homers. The Dodgers traded Walt Moryn, Don Hoak, and Russ Meyer to the Cubs for Jackson and pitcher Don Elston after the 1955 season with the expectation that the slugger would succeed Jackie Robinson at third base. Unfortunately for Jackson and the Dodgers, he suffered a serious knee injury in 1957, and Handsome Ransom never played regularly again. (Photo: 1952 Topps Baseball Card)

~Bob Logan 1910–1978 (Cubs 1937-1938)
Bob Logan was a pitcher with a bit of a wild streak. He walked 17 batters in 22 innings. He also pitched briefly with Detroit, Cincinnati, and Brooklyn, but during the war he got his one extended shot with the Boston Braves. After not starting a single game in his previous big league career, he went 7-11 as a member of Boston’s rotation. Logan was a left-handed pitcher, so naturally, his nickname was Lefty.

~Cesar Izturis 1980– (Cubs 2006-2007)
He will always be remembered by Cubs fans as the player the Cubs got in return for Greg Maddux. Cesar was a slick-fielding shortstop, but his stay in Chicago was a relatively short and unhappy one. All told he was with the Cubs for about one calendar year before they shipped him off to Pittsburgh. Nevertheless, Izturis enjoyed a long and productive big league career. He played for nine different teams in 13 seasons, and was an All-Star and Gold-Glove winner.

~Allen Webster 1990–(Cubs 2018-2019)
The Cubs brought up Webster for the last few weeks of the 2018 season and the reliever appeared in three games.He also spent the first month of the 2019 season in the Cubs bullpen (12 appearances) before getting hurt in early May. Webster previously pitched for the Red Sox and the Diamondbacks, and also pitched a season in Korea.