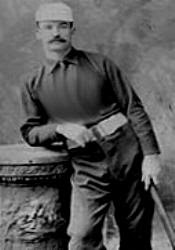 ~King Kelly 1857 (White Stockings 1880-1886)
King Kelly was famous for his running and hitting (he invented or at least perfected the hit and run), and he was said to have inspired the poem “Casey at the Bat,” but he was also considered a big fat cheater. If the umpire wasn’t looking, he would run from first to third by running across the diamond over the pitcher’s mound. He once came into the game in the middle of a play (from a drunken stupor on the bench) and announced “Kelly, Now Catching” so that he could take the throw and tag out the runner at home plate. (A rule was instituted after that banning something that nobody assumed needed to be spelled out—No mid-play substitutions). They even wrote a song about him called “Slide Kelly Slide.” The lyrics were…

Your running’s a disgrace,
Stay there, hold your base!
If someone doesn’t steal you,
And your batting doesn’t fail you,
They’ll take you to Australia!
Slide, Kelly, Slide

But that’s not what he was remembered for. Mike King Kelly was also a notorious drunk. Cap Anson hired a Pinkerton to keep an eye on him. When the report came in about Kelly’s off-the-field behavior, it claimed that he was out until 3 AM drinking lemonade. Kelly angrily denied it. “I was not! That was straight whiskey. I never drank lemonade at that hour in my life!” Kelly drank before, during, and after the games. One time the game had to be held up because Kelly was getting drunk with some fans in the box seats. Of course it caught up to him. The White Stockings (now known as the Cubs) got rid of him by selling him to Boston for $10,000 (which was a ton of money in those days). In Boston, the drinking took it’s toll. He had to be sobered up before every game in a Turkish bath. He lasted until 1893, but the last few years he was just a shell of the player he once was…and he wasn’t even that old. He drank himself to death the following year at the age of 36. 5000 fans came to see him at his funeral. King Kelly was elected into the Baseball Hall of Fame in 1945.

~Rick Aguilera 1961 (Cubs 1999-2000)
When the Cubs acquired Aguilera in May of 1999, they thought he was one of the final pieces to the puzzle. Rick had a tremendous career with the Twins–including nine seasons with double-digit saves. With the Cubs he didn’t fare so well. Aguilera saved a total of 37 games over two seasons, but he also gave up 17 homers, and his ERA was pushing 5. The pitcher the Cubs traded to get him, Kyle Lohse, has won nearly 150 games for the Twins, Reds, Cardinals, and Brewers (and a World Series ring as a starting pitcher on the 2011 Cardinals.)

~Loyd Christopher 1919 (Cubs 1945)
Loyd got exactly one at bat for the Cubs during their 1945 pennant-winning season. He was claimed off waivers from the Red Sox that year. Christopher spent most of his career in the minor leagues, where he hit .283 over 16 seasons. He also had a cup of coffee with the White Sox in 1947.

~Fred Beebe 1879 (Cubs 1906)
Beebe was a local Chicago boy, having attended Hyde Park High School and the University of Illinois. The righthanded pitcher was off to a good start in his rookie season of 1906, going 6-1 with a 2.70 ERA, when the Cubs traded him to St. Louis for their former ace Jack Tayor. Despite a lifetime ERA of only 2.86, Beebe finished his career nearly 20 games under .500. 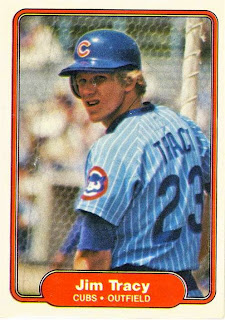 ~Jim Tracy 1955 (Cubs 1980-1981)
Jim was a part-time outfielder and pinch hitter for the Cubs in his only two big league seasons. He didn’t quite have enough power to claim a full-time corner outfielder job, and he didn’t quite have the range to play center, so he took his services to Japan. After his playing career, however, Tracy went into coaching and achieved considerable success. He has since managed the Rockies, Pirates, and Dodgers. In 2009 he was named the National League’s manager of the year, after taking the Colorado Rockies to the playoffs.