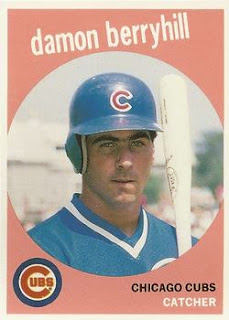 ~Damon Berryhill 1963 (Cubs 1987-1991)
Berryhill was the primary catcher for the surprising 1989 Cubs team that won their division, the Boys of Zimmer. He shared the position with fellow young catcher Joe Girardi. He was known for his toughness behind the plate and his clutch hitting, but he also proved to be injury prone. He missed that 1989 playoff series because of an injury. After a few more seasons of waiting for Berryhill to stay healthy for an entire season, he was traded to the Braves in the deal that brought Turk Wendell to Chicago. He played in the World Series for the 1992 Braves. (Photo: Topps 1989 Baseball Card)

~Manny Corpas 1982 (Cubs 2012)
Manny was the closer for the only Rockies team to ever go to the World Series (2007), but the young Panamanian developed arm problems after that. When the Cubs took a flyer on him in 2012, he was coming off arm surgery. He did appear in 48 games for the Cubs that season, but he was largely ineffective. His ERA was over 5. After the season, he went back to the Rockies.

~Mike Martin 1958 (Cubs 1986)
Martin played nine seasons in the minors and got only one brief taste of the big time with the Cubs at the end of a disappointing 1986 season. He backed up Jody Davis and appeared in a grand total of eight games. In 13 at bats, Martin got one hit.

~Bennie Tate 1901 (Cubs 1934)
Bennie was in his tenth big league season when the Cubs brought him in to back up Gabby Hartnett in 1934. Bennie had never been a starter for his previous teams (the Senators, White Sox, and Red Sox), but he did get extensive playing time, including the 1924 World Series (with the Senators). Not so much with the Cubs. He appeared in 11 games and was released before the year was over. It was the last stop of his big league career.

~Cozy Dolan 1872 (Orphans 1900-1901)
Cozy was actually named Patrick Henry Dolan after the founding father, and became one of two Cozy Dolans to play in the big leagues (no relation). He played for the Cubs at the turn of the century. The outfielder/first baseman was sold to Brooklyn during the 1901 season, and had significantly more success with the Superbas (as they were known at the time). In spring training of 1907 he got sick, and died of typhoid fever. Cozy was only 34 years old at the time.