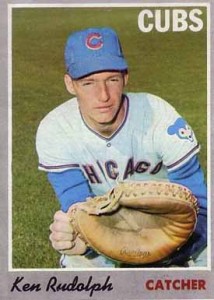 ~Ken Rudolph 1946 (Cubs 1969-1973)
Ken served as the backup catcher to Randy Hundley for several seasons, beginning with the memorable 1969 season. He was only 22 years old when he broke camp with the Cubs that year. His best season in a Cubs uniform was probably 1973. He appeared in 64 games for the Cubs that year, although he hit only .206. Ken was traded to the Giants during spring training of 1974. He later also played for the Cardinals and Orioles. (Photo: Topps 1970 Baseball Card)

~Kevin Hart 1982 (Cubs 2007-2009)
Kevin had flashes of effectiveness out of the bullpen for the Cubs for a few seasons, including the playoff years of 2007 and 2008. He even made the 2007 postseason roster as a 24-year-old rookie. The Cubs traded him to the Pirates midway through the 2009 season in a trade they clearly regret. It wasn’t because Kevin turned out to have such a good Pirates career (he didn’t–after 2009 he never appeared in the big leagues again). It’s because the prospect thrown in to the deal (Josh Harrison) has gone on to become an all-star. In return the Cubs got two pitchers who didn’t do much with the club–Tom Gorzelanny and John Grabow.

~John Upham 1941 (Cubs 1967-1968)
Upham pitched and played outfield for the Cubs in two brief big league trials. As a pitcher, he was a decent hitter. As an outfielder, he was a decent pitcher. His lifetime ERA in the big leagues was 5.40, and he never got an extra base hit. In fairness to Upham, he did bat .293 over his nine year minor league career.

~Theo Epstein 1973 (Cubs President of Baseball Operations 2011-Present)
When Epstein took over control of the Cubs baseball operations, they were a team in disarray. The minor league system was considered one of the worst in the league, and the big league club’s roster was full of bloated veteran contracts. He told Cub fans that it would take awhile, and he certainly wasn’t lying about that. After several last place finishes, the Cubs finally emerged from the darkness in 2015, in no small part due to the work of Theo Epstein. Before coming to the Cubs, of course, Theo led the Boston Red Sox to two World Series titles. His grandfather Phillip G. Epstein won an Academy Award for co-writing the screenplay for “Casablanca”, widely regarded by screenwriters as the best screenplay ever written. But when Theo wrote the script for the Cubs World Series championship in 2016, he surpassed his grandfather’s incredible accomplishment, and ensured a future place for himself in the baseball Hall of Fame