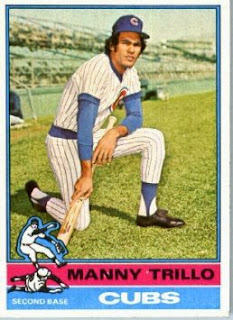 ~Manny Trillo 1950 (Cubs 1975-1978, 1986-1988)
Trillo was a prospect acquired from Oakland in the trade that sent Billy Williams to the A’s, and immediately became the team’s starting second baseman. He had a few very good years for the Cubs, finishing third in the Rookie of the Year voting in 1975, and making the all-star team in 1977, but the Cubs sent him to the Phillies after the 1978 season in a blockbuster trade. It turned out to be a bad deal for the Cubs. The players they acquired (Jerry Martin, Barry Foote, Ted Sizemore) didn’t do much for Chicago, while Trillo went on to be a three-time Gold Glover, three-time all-star, two-time Silver Slugger, and the NLCS MVP for the Phillies. Manny returned to the Cubs towards the end of his career, but by then he was a part-timer. (Photo: Topps 1976 Baseball Card)

~Chris Krug 1939 (Cubs 1965-1966)
Krug split the catching job with Vic Roznovsky in 1965, and the pair were probably the worst catcher tandem in all of baseball. Krug hit .201. The Cubs went out and got Randy Hundley from the Giants the following season, and Krug stayed on the team during Hundley’s rookie season. He later also played for Padres.

~Greek George 1912 (Cubs 1941)
His real first name was Charles, but the Greek-American was called Greek his whole career. The backup catcher played one season for the Cubs in 1941. He also played for the Indians, Dodgers, and Athletics in his big league career.

~Tarrik Brock 1973 (Cubs 2000)
Brock broke camp with the Cubs in 2000 and remained with the big league club until the end of April. He only saw limited action in the outfield, getting two hits in 12 at bats. The speedy outfielder also stole a base. It was his only stint in the big leagues after a 13-year minor league career. Nevertheless, he remains the all-time greatest Tarrik to ever play for the Cubs.

~Scott Bullett 1968 (Cubs 1995-1996)
Bullett was a reserve outfielder for the Cubs for two-seasons. He served mainly as a backup to Luis Gonzalez and Brian McRae, but he appeared in over 100 games two years in a row. It was his last taste of the big leagues. He had previously played for the Pittsburgh Pirates.

~Dick Manville 1926 (Cubs 1952)
The tall righthanded reliever appeared in 11 games for the 1952 Cubs–the best Cubs team of the decade (which isn’t saying much). He had a rough go of it, however, posting an ERA of nearly 8. He never made it back to the big league again. On the other hand, the Harvard AND Yale man had a fairly good education to fall back on.

~Allen Elliott 1897 (Cubs 1923-1924)
The first baseman was called Ace by his teammates. He backed up the oft-injured Ray Grimes, and got quite a bit of playing time (especially in 1923) as a result. His stint with the Cubs was his only taste of the big leagues.

~Herb Hunter 1895 (Cubs 1916-1917)
The young infielder only got into a handful of games with the Cubs during the first two seasons they played at what is now known as Wrigley Field. He never got a hit in a Cubs uniform. He also played for the Giants, Red Sox, and Cardinals.

~Jim Doyle 1881 (Cubs 1911)
Doyle was the starting third baseman for the Cubs the year after they appeared in the 1910 World Series (versus the Philadelphia A’s). He hit .282, knocked in 62 runs, and stole 19 bases. His future looked bright, but in February of 1912, he had horrible pain in his stomach. Before he could make it to the hospital, his appendix burst, killing him at the age of 30.

~Barry McCormick 1874 (Colts/Orphans 1895-1901)
Barry was a very valuable player for the Cubs (then known as the Colts, and then the Orphans). He was a middle infielder, but he started nearly the same number of games at second base, third base, and shortstop in his six years with Chicago. He jumped to the upstart American League for the last few years of his career, performing the same role for the St. Louis Browns and the Washington Senators. A Christmas Song for Cubs fans, written and performed by Tom LaTourrette.