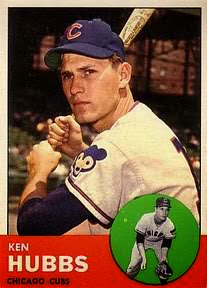 Ken Hubbs 1941 (Cubs 1961-1963)
He wasn’t even 20 when he debuted for the Cubs in September of 1961, but he made enough of an impact to be named the starting second baseman in 1962. It was a rough year for the Cubs (they finished with their worst record ever—behind even the expansion Houston Colt 45s, and ahead of only the worst team of all-time, the ’62 Mets), but it was a breakout year for Ken Hubbs. He won a gold glove for his play at second base and was named the Rookie of the Year. One of the roughest transitions for Hubbs had been the travel schedule. He was terrified of flying. (His roommate Ron Santo vividly describes the sheer terror Hubbs felt every time the Cubs had to fly in his autobiography “For the Love of Ivy,” a book we highly recommend). Instead of letting it get the best of him, Hubbs tackled it head on and learned how to fly himself. The technique worked. He purchased an airplane (a Cessna 172) in November of 1963, and got his pilot’s license in late January of 1964. By learning how to fly, he had conquered his fear. On February 13th, he took his life-long pal Larry Doyle up in the plane from their hometown in California to Provo Utah, to visit Doyle’s wife. On the way home, however, he made the mistake of taking off in a snowstorm. Ken Hubbs and Larry Doyle died when they crashed into a lake just five miles from the airport. Their bodies weren’t found until two days later. Hubbs was only 22 years old. (Photo: Topps 1963 Baseball Card)

~Alec Distaso 1948 (Cubs 1969)
In 1967, the Chicago Cubs had the first pick in the amateur draft. Most of the teams in the league agreed the top two picks were outfielder Ken Singleton and catcher Carlton Fisk. The Cubs disagreed with most teams. They chose a pitcher instead; an 18-year-old high schooler from California. His name was Al Distaso. The Cubs considered him the second coming of Don Drysdale. He didn’t have Drysdale’s size or fastball, but he did resemble him physically. And at first, he showed some promise. In his first two minor league seasons he struck out 225 in just over 300 innings.  Leo Durocher took a chance, and named him the 10th man on the pitching staff going into the season. Al debuted on April 20th against the Expos and pitched two scoreless innings. He came in again on April 22nd, but this time he wasn’t facing the Expos. He was facing the fearsome Pittsburgh Pirates. Richie Hebner, Matty Alou, Roberto Clemente, and Willie Stargell all got hits against Al in what turned out to be his final major league appearance. He hurt his elbow and was sent down to the minors after that and never returned. But Al found a higher calling after leaving baseball for good in 1971. He became a police officer; a decorated homicide detective in the roughest neighborhood of Los Angeles. Al retired from the force in 1994, and the other guys in his unit made sure that everyone got a copy of his 1969 Cubs Rookie card. Al Distaso passed away in 2009.

~Vic LaRose 1944 (Cubs 1968)
Vic was a starter on the Cubs AAA team for the entire 1968 season, and was called up in September to get a taste of the big leagues. He backed up Glenn Beckert and Don Kessinger for a few weeks, and got into four games. That was the extent of his cup of coffee. Vic never got another chance. In three big league plate appearances, he didn’t get a hit.

~Doc Gessler 1880 (Cubs 1906)
Everyone called him Doc, but the already nicknamed youngster was also called Brownie. The Cubs acquired him to be a backup outfielder/first baseman in 1906, and he became part of the all-time winningest team in history. He even got a few at bats in the 1906 World Series against the White Sox. Unfortunately for Doc, he was traded in 1907 in a bizarre revenge trade. Cubs player/manager Frank Chance was so ticked off at Reds pitcher Jack Harper for beaning him so many times, he acquired him just to punish him. Doc is the man he had to give up to get Harper. Harper was sent to the end of the bench with the Cubs, and was never allowed to pitch–effectively ending his career. Doc played five years in the big leagues for Boston and Pittsburgh.

~Eddie Vedder (Cubs fan 1964-present)
Eddie Vedder was born in Evanston Illinois. Even though his family moved out to San Diego in the mid-70s, he always followed the Cubs. In 2007, he got to live out his dream by training with the team at Wrigley. Vedder warmed up with Cubs star Kerry Wood before the game and then threw out the ceremonial first pitch, wearing one of Wood’s jerseys. He returned later in the game to sing Take Me Out To The Ball Game during the seventh inning stretch – the fourth time he had that honor since performing the song on Independence Day in 1998. The Pearl Jam frontman was also asked to pen a new post-game tune by his childhood baseball hero, Ernie Banks, and he did. The song is called “All the Way” and it became a big hit on Chicago radio stations during the stretch run of the 2008 season. During the Cubs World Series run of 2016, Eddie was a constant presence. He was there for all the big wins and helped the team celebrate their World Series win. One day they went all the way, oh, one day they went all the way.