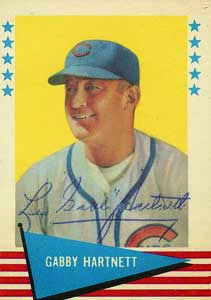 ~Gabby Hartnett 1900 (Cubs 1922-1940)
Gabby was one of the greatest Cubs of all-time. His real name was Charles Leo Hartnett. No surprise where that nickname came from, he was known as someone who was “constantly talking” when he was catching. Gabby is known as one of the all-time greats, probably the best catcher of the first half of the 20th century. Gabby was the National League’s catcher in the first six all-star games. He played in four World Series for the Cubs, as a backup catcher/pinch hitter in 1929, the starting catcher in ’32 and ’35 (he won the MVP that year), and in 1938, his “homer in the gloamin” won the pennant for the Cubs. He was also the manager of that team. As a player he was beloved. As a manager, he was hated. His nickname as the manager was “Drizzlepuss” or “Old Tomato Face”. He left the Cubs after 1940 and his last year was spent as a player/manager for the New York Giants. He is buried in All Saints Cemetery in Des Plaines, the same cemetery as Harry Caray.

~David DeJesus 1979 (Cubs 2012-2013)
DeJesus was signed as a free agent in the fall of 2011. The veteran outfielder was considered a placeholder until some of the young talent came up through the system. He played hard in Chicago and became a fan favorite. He was an above average defender at all three outfield positions, and had a good on-base percentage as a hitter. The Cubs traded him to the Nationals in the fall of 2013.

~Fernando Ramsey 1965 (Cubs 1992)
The Panamanian centerfielder was a speedster in the Cubs system, stealing over 30 bases in four different seasons, but he couldn’t steal first base. His lifetime minor league average of .262 was hardly inspiring. He got a cup of coffee with the Cubs in September of 1992 and hit only .120. He never got another shot at the big leagues.

~Paul Moskau 1953 (Cubs 1983)
Moskau was in his seventh big league season (after stints with the Reds and Pirates) when he joined the Cubs in 1983. The righthanded pitcher started the season in the rotation, but posted a 6.75 ERA and won only three of his eight starts. The Cubs sent him to the minors in May and he never made it back to the big leagues.

~Oscar Gamble 1949 (Cubs 1969)
In November of 1969, the Cubs made a trade that they hoped would put them over the top. They traded pitcher Dick Selma and a young prospect, to the Phillies for former all-star outfielder Johnny Callison. Unfortunately for the Cubs, that young prospect turned out to be Oscar Gamble. Gamble was only 19 years old at the time, but he had already gotten a taste of the majors with the Cubs. How did that trade turn out? Gamble played in the majors until 1985, and hit 200 home runs. Of those 200 home runs, only one of them came for the Cubs. He went on to play in the World Series for the Yankees, and hit .358 for them in 1979. Most horribly, his best season was with the Southside Hitmen 1977 Chicago White Sox. Callison had one semi-decent year, then was done. Needless to say, he wasn’t the final piece to take them over the top. The biggest tragedy, however, was what could have been on the north side if they had never traded Gamble. After Jose Cardenal joined the Cubs in the early 70s, the Cubs could have had the greatest “fro” outfield of all-time.

~Marv Felderman 1915 (Cubs 1942)
He got exactly six at bats in the big leagues, and all of them came for the Cubs. The backup catcher got one hit. His nickname was Coonie. Coonie played in the minor leagues until 1951.

Herm Doscher 1852 (White Stockings 1879)
Herm was born a month after Franklin Pierce was elected president. The youngster from New York grew up to be a big league third baseman. He played in three games for the 1879 White Stockings and managed only one hit in eleven at bats. He also played for Brooklyn, Washington, Troy (yes, Troy was a big league team), and Cleveland.

~Fred Merkle 1888 (Cubs 1917-1920)
Maybe the most unfairly maligned player in baseball history, Fred Merkle was known as “Boner” or “Bonehead” for nearly all of his major league career. Despite a very solid 16 year career in which he played in five World Series, Merkle will always be remembered for a baserunning error during his rookie season of 1908. On the play that should have provided the Giants with the game winning run to clinch the 1908 pennant (over the Cubs), Merkle was the runner on first base. In a move that will haunt him for the rest of his life, he tried to escape the rioting Polo Grounds mob storming the field instead of touching second base (as he was technically required to do in those days). The Cubs noticed he didn’t touch the base, got the ball back somehow, and fighting their way through New York’s rowdiest and drunkest fans, touched second base. Merkle was called out, the game was declared a tie, and it was ordered to be replayed at the end of the season by the president of the National League. The Cubs won the replayed game, and the pennant. Merkle was blamed by the NY fans for the rest of his life. His last name actually became a synonym for “a dumb mistake.” Good ol’ Bonehead later played four seasons with the Cubs (1917-1920) and was the starting first baseman for the 1918 pennant winners. Though he played in five World Series for three different teams, his team never won.