~Rod Blagojevich 1956 (Cubs fan 1956-Present)
He was a Congressman, the Governor of Illinois, and a convicted felon–but through it all, he remained a Cubs fan. When Cubs ace Carlos Zambrano pitched a no-hitter Sept. 14, 2008, Blagojevich proclaimed Sept. 16 “Carlos Zambrano Day.” Before the 2008 playoff series against the Dodgers, Blagojevich helped lead a big rally in support of the Cubs. He got a little long-winded that day, and the fans eventually drowned him out with a chorus of “Go Cubs Go,” but still. He was pontificating about his love of the Cubs. He handled similar honors in 2007, getting a prime slot talking to the crowd at the lunchtime playoff push rally at Daley Plaza. Here’s what he said: “As the governor, I stopped asking myself first the question ‘Is it the right thing or the wrong thing?’ Now the first question I ask myself when I govern Illinois is, ‘What would Lou do?” I’ve got to tell you, speaking for me as a lifelong Cubs fan, this is a heck of a lot better than winning elections.” When Kerry Wood had his charity bowling benefit, Governor Blagojevich was there. In July 2005, he joined Cubs legend Ron Santo on a crusade to raise money for diabetes research, and signed legislation that cleared the way for even more money to be raised for Diabetes research. He idolized players like Santo. When he was boy, he said his dream was to play center field for the Cubs. In 2003, when Steve Bartman was excoriated by many fans, Governor Blagojevich was one of them, blaming him publicly for the loss. Granted, Rod has made Illinois the laughing stock of the nation, but he truly loves the Cubs. It’s ironic that one of the charges against him involved extorting the Tribune to fire editorial staff in exchange for the state securing the sale of Wrigley Field.

~Mel Rojas 1966 (Cubs 1997)
The Cubs signed Mel to be their closer after back-to-back 30 save seasons for the Expos. Something must have happened to him on the flight from Montreal to Chicago because he was lit up as the Cubs closer. Rojas gave up 11 homers and contributed greatly to the 0-14 start that year. He was so bad that the Cubs traded him before the season was over to the Mets in a bad contract for bad contract trade. And they considered themselves lucky. Possibly the worst free agent signing in Cubs history.

~Rick Wrona 1963 (Cubs 1988-1990)
One of three young catchers on the 1989 Division Champion team (along with Joe Girardi and Damon Berryhill). Wrona got the least playing time of three. He lasted three seasons in Chicago as the team’s third string catcher. He later also played for the Reds.

~Paul Assenmacher 1960 (Cubs 1989-1993)
The Cubs picked up Assenmacher towards the end of the 1989 season to help bolster their bullpen down the streth and in the playoffs. Assenmacher didn’t pitch too well for Chicago that season, but he was one of the best lefthanders in baseball over the next few years. He saved 33 games and won 20 while pitching in an average of 70 games a season. After leaving the Cubs he pitched in two World Series with the Indians. 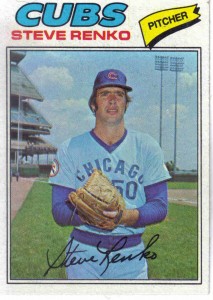 ~Steve Renko 1944 (Cubs 1976-1977)
The Cubs paid a high price indeed to acquire Renko (and Larry Biitner). They gave up their slugging first baseman Andre Thornton. Thornton went on to become an all-star, while Renko won 10 games over two seasons. He was traded to the White Sox in 1977. (Photo: Topps 1977 Baseball Card)

~Ed Donnelly 1932 (Cubs 1959)
In his only shot at the big leagues, Ed appeared in 9 games for the Cubs. He had trouble with his command, walking 10 and giving up 18 hits in 14 innings. His grandson Jarred Cosart is currently pitching in the big leagues.

~Jimmy Johnston 1889 (Cubs 1914)
Johnston had an outstanding 13-year big league career. He played for the Cubs in 1914 and served as a utility man, but Johnston really blossomed after leaving Chicago. He led Brooklyn to two World Series and finished in the top ten in hits, runs, and stolen bases four times. His career batting average was an impressive .294.