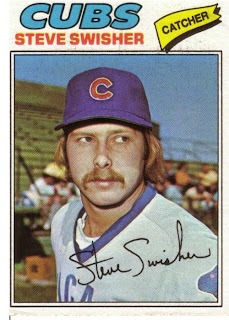 ~Steve Swisher 1951– (Cubs 1974-1977)
Swisher was acquired by the Cubs from the White Sox in the trade that sent Ron Santo over to the south side of the city. For most of his time with the Cubs, Swisher shared the catcher job with George Mitterwald. But in 1976, he had his best season in a Cubs uniform and was named an All-Star. That All-Star selection, however, may be more of a statement about the 1976 Cubs than an endorsement of Swisher. He hit only .236 that season. It was just that nobody else on the Cubs was worthy of making the team. Swisher was an outstanding defensive catcher, who played in the big leagues for nine seasons. His son Nick is a big leaguer too. Both father and son were first round draft picks. (Photo: Topps 1977 Baseball Card)

~Jason Heyward 1989– (Cubs 2016-present)
When the Cubs signed the 3-time Gold Glover to an eight-year contract after the 2015 season, Cubs fans were beyond excited. St. Louis Cardinals fans (where he had played the previous season) didn’t feel the same way. But he had a rough first season in a Cubs uniform, hitting only .230 and driving in a measly 49 runs. On the other hand, he is credited with firing up his teammates with a crucial pep talk during a rain delay in the 7th game of the World Series. Heyward also won a Gold Glove for his incredible defensive skills in right field. His hitting improved a bit in 2017, but once again it was his steady Gold Glove that made him valuable. Jason had his best offensive season with the Cubs in 2018 (hitting .270), and had some incredible clutch hits, including a dramatic walk-off grand slam. On the other hand he still only managed 8 homers for the year. Not the kind of output you’d expect from the highest paid player on the team. So, imagine everyone’s surprise when Jason’s power stroke returned in 2019 (21 homers). Was it the juiced ball? An adjustment to his swing? As long as he remains a team leader, and their most crucial glove, the Cubs will take what they can get from Jason’s offense.

~Ben VanRyn 1971– (Cubs 1998)
Ben was a top prospect — a member of the U18 U.S. National Team, and a first round draft choice by the Expos, but he never quite put it together at baseball’s top level. His first taste of the big leagues was a cup of coffee with the Angels, and that was six years after he was drafted. When he joined the 1998 Cubs, he was a 27-year-old journeyman. After only nine appearances, the left-handed reliever was traded to the San Diego Padres for Don Wengert. He pitched for four teams in the big leagues, including the Angels and the Blue Jays.

~Pat Mahomes 1970– (Cubs 2001)
Mahomes was a well-traveled journeyman pitcher who lasted eleven seasons in the big leagues. He pitched for the Twins, Red Sox, Mets, Rangers, Pirates, and Cubs. His lifetime ERA was over five, and he never registered double-digits in either wins or saves, but he pitched in over 300 big league games. With the Cubs, Mahomes was 1-1, with a 3.86 ERA.

~Bob Scanlan 1966– (Cubs 1991-1993)
The Cubs acquired the tall (6’7″) right-hander from the Phillies in the deal that sent Mitch Williams to Philadelphia. The Beverly Hills native was a highly regarded prospect, who stuck around with the Cubs for several years. He filled just about every role on the pitching staff at one time or another, from starter to closer. In three seasons he won 14 games and saved 15 games. After the 1993 season he was traded to the Brewers. Scanlan pitched in the big leagues until 2001 with additional stops in Detroit, Kansas City, Houston, and Montreal. After his playing career he went into television, working as an analyst on San Diego Padres broadcasts.

~Junior Kennedy 1950– (Cubs 1982-1983)
Kennedy was a utility infielder in the big leagues for seven seasons, the last two of which were with the Cubs. He actually got a substantial amount of playing time in his first season in Chicago, getting over 240 at-bats. Unfortunately for Junior, he didn’t take advantage of the situation, batting only .219. After his playing career, Kennedy coached in the Cubs farm system.

~Bill Campbell 1948– (Cubs 1982-1983)
Like anyone with the last name of Campbell, Bill was tagged with the nickname of Soup pretty early on in his career. He was an excellent relief pitcher for the Twins and Red Sox, playing in an All-Star game as a representative of the Red Sox in 1977. With the Cubs, Soup led the league in appearances in 1982, but slumped a bit in 1983. Nevertheless, he played an important role in the Cubs 1984 division championship because he was part of the trade that brought Gary Matthews and Bob Dernier to the Cubs. (Photo: Topps 1984 Baseball Card)