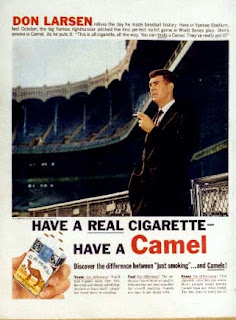 ~Don Larsen 1929–2020 (Cubs 1967)
When the MLB channel debuted, the first full game they showed was the only perfect game in World Series history. Everyone remembers that game, pitched by the immortal Don Larsen. Not many Cubs fans realize that the same Don Larsen also pitched for the Cubs. Even though the two-time World Series champ hadn’t pitched in the majors at all in 1966, the Cubs signed him for the 1967 season. Larsen pitched a total of four innings for the Cubs, the last four innings of his major league career. His ERA was 9.00. The MLB channel won’t be showing those four innings any time soon.

~Adonis Terry 1864–1914 (Colts 1894-1897)
His real first name was William, but he went by Adonis. Terry was a fairly good pitcher. He won 197 games in his 14-year big league career (including 21 with the Cubs, then known as the Colts, in 1895). But Adonis also lost 196 games, and he was never what you’d call a dominant pitcher. He gave up 76 homers in an era of virtually no homers, and he walked almost as many men as he struck out. After his playing career ended, he became an umpire.

~Marc Pisciotta 1970– (Cubs 1997-1998)
As a 12-year-old, Pisciotta was a superstar. He led his team to the Little League World Series championship in 1983. In the big leagues he wasn’t quite as overpowering. On the other hand, how many Little League stars never make it all the way to MLB? Marc was a right-handed reliever for the Cubs for a few seasons. He won four games over two seasons, and appeared in a Cubs uniform 67 times. He later pitched for the Kansas City Royals.