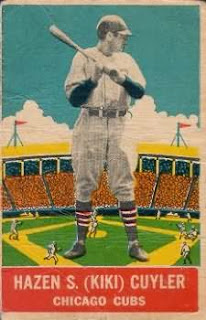 ~Kiki Cuyler 1898–1950 (Cubs 1928-1935)
His real name is Hazen Shirley Cuyler. Cuyler was called “Cuy” by his school teammates. It was while winning the MVP title of the Southern Association with Nashville in 1923 that he acquired the Kiki nickname. Fans heard the players shout for him to take the ball when he rushed in on a short fly. The shortstop would yell, “Cuy,” and the second baseman would echo the call. In the press box the writers turned this into “Kiki.” (It’s the long “i” sound, although it doesn’t look like it.) Kiki was a great player. He led the league in stolen bases four times, runs twice, doubles once, and had an incredible lifetime batting average of .321 (although he never won a batting title — he finished in the top ten five times). He was part of the Cubs pennant winners of 1929 and 1932, although his teammates didn’t like him much. They thought he was a bit of a fancy lad because he used to put suntan powder on his face. Kiki Cuyler was elected into the Hall of Fame by the veterans committee in 1968, eighteen years after his death. His .325 career Cubs batting average is the fifth best in Cubs history. (Photo: 1933 Delong Baseball Card)

~Sean Marshall 1982-– (Cubs 2006-2011)
Marshall had moments of brilliance as a starting pitcher in his first few years with the Cubs, but the 6’7″ lefty really found his niche when he was moved to the bullpen. In his last two years in Chicago he appeared in 158 games, saved six, and posted a sparkling ERA in the mid-2s. He became one of the first players traded by the new Cubs brain trust before the 2012 season. The Cubs got Travis Wood in return.

~Todd Wellemeyer 1978– (Cubs 2003-2005)
Wellemeyer was one of the many fireballers that came up through Cubs farm system in the first decade of the 21st century. He was tall and imposing and had a blazing fastball, which led to quite a few strikeouts (92 Ks in 84 innings). But he also had control problems (61 BB in 84 innings), and that was his undoing in Chicago. The Cubs traded him before the 2006 season and he later pitched for the Marlins, Cardinals, Royals, and Giants.

~Tom Seaton 1887–1940 (Cubs 1916-1917)
Seaton was part of the Cubs pitching staff during their first two seasons at what is now known as Wrigley Field. He was a holdover from the Federal League (Newark and Brooklyn), so he played in the ballpark even before the Cubs did. Seaton started and relieved, and only gave up three homers in almost 200 innings pitched. After he left the Cubs (in 1920) he was accused of suspicious behavior. He and a Pacific Coast League teammate (Luther Smith) were identified as being too close to gamblers, and were released. Neither played organized baseball again.

~Marlon Byrd 1977– (Cubs 2010-2012)
Byrd was signed as a free agent by the Cubs after a stellar run in Texas. In his first year with the Cubs he was an All-Star, and hit .293 with 66 RBI. The center fielder’s output went down a bit the following year. He also sustained a truly scary injury that year when he was hit in the face with a pitch from Red Sox fireballer Alfredo Aceves at Fenway Park. He had to be helped off the field, and was out of the lineup for quite a while. When he returned he wore a newly designed batting helmet that shielded his cheek. The Cubs traded Byrd to Boston (for Michael Bowden) in 2012.

~Cal McVey 1849–1926 (White Stockings 1876-1877)
McVey played for the Cubs (then known as the White Stockings) in the National League’s very first season. Cal played every single position on the field, including pitcher, but he was best known for his hitting. McVey played in the big leagues for nine seasons and finished with a lifetime average of .346. After his playing career he endured tragedy after tragedy. His wife was seriously injured in the 1906 San Francisco earthquake. Cal worked as a miner and was crippled in a 30-foot fall. But in 1919 he was the guest of the Cincinnati Reds during the World Series. They were honoring the 50th anniversary of professional baseball that day. Little did they know the White Sox were cheating — throwing the series to eventual champion Cincinnati. 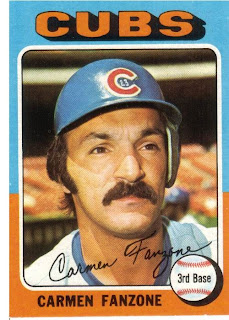 ~Carmen Fanzone 1943– (Cubs 1971-1974)
Although he played 2B and 3B and was one of the players who wore #23 like Ryne Sandberg, Carmen’s similarities with the Future Hall of Famer ended there. Fanzone was probably better known for his musical abilities and his incredible mustache than he was for the .190 he hit backing up Bill Madlock in 1974. He played four seasons for the Cubs as a backup infielder (1971-1974), and he played the trumpet so well the Cubs asked him to perform the National Anthem. After his playing career ended, he pursued his musical dreams and played the jazz flugelhorn. Despite rumors to the contrary (Wikipedia!), Fanzone never played with the Tonight Show band. He did hang out with them, though. For many years after his playing days, he also participated in Randy Hundley’s fantasy camp in Arizona. (Photo: Topps 1975 Baseball Card)