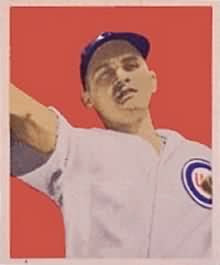 ~Emil Verban 1915–1989 (Cubs 1948-1950)
Verban was a second baseman for the Cubs. They called him the Antelope because of his speed early in his career, but by the time Verban played in Chicago, he wasn’t exactly tearing up the base paths. In his three seasons with the Cubs he stole a total of seven bases. To say that Verban wasn’t exactly known for his power would be an understatement. The Antelope had 2911 career at-bats, and hit exactly one home run. It came while he was wearing a Cubs uniform, and he hit it against Johnny Vander Meer (the man who once threw consecutive no-hitters) on September 6th, 1948. Verban’s name lives on thanks to the Emil Verban Society, formed in 1975 by a group of Washington-based Cubs fans. Among the original six members: Chief of Staff for President Gerald Ford, Dick Cheney. Later members included President Ronald Reagan and First Lady Hillary Clinton. The Antelope passed away during the Cubs playoff season of 1989. He was 72. (Photo: 1949 Bowman Baseball Card)

~Fidgety Phil Collins 1901–1948 (Cubs 1923)
He was a local Chicago boy, and he got his nickname because he constantly fidgeted on the mound, fingering the rosin bag, tugging at his trousers, and tramping around the mound. He got his start with the Cubs in 1923, and pitched exactly one game. He started the game, lasted five innings, and got the win. Unfortunately for Phil, he never pitched another game for his hometown team. Fidgety Phil fidgeted around the minor leagues for six years after that, and didn’t re-emerge in the big leagues until 1929. He eventually became the ace of the worst team in the league (the Philadelphia Phillies) and even won 16 games for them in 1930, but he always stunk against the Cubs. In 1930, he gave up five home runs and nine runs to the Cubs in two innings.

~Josh Vitters 1989– (Cubs 2012)
Vitters was the third overall pick in the 2007 draft, behind only David Price and Mike Moustakas, so naturally, the expectations were very high for him. When you get picked ahead of the likes of Matt Wieters, Madison Bumgarner, Jason Heyward, Devin Mesoraco (all chosen in the next few picks), that’s to be expected. Vitters’ progress was agonizingly slow, however. He didn’t make it to the big leagues until 2012, and when he did, it was clear that despite a good season at AAA, he wasn’t quite ready for the big-time. He hit only .121 in over a hundred plate appearances, and hasn’t been back up to the big leagues since.

~Mike Olt 1988– (Cubs 2014-2015)
Olt was a first round pick (Rangers), but didn’t develop as projected. The Cubs more or less gave him the starting third base job out of spring training in 2014, and while Olt showed tremendous power (12 homers in 187 ABs), he had a very difficult time making contact. He struck out 84 times and hit only .139. That led to a demotion to Iowa. He was likewise given the big league job in 2015, but after only a few games was replaced by a little-known rookie named Kris Bryant. After spending most of the season on the DL, Olt was waived in September.

~Seth Frankoff 1988– (Cubs 2017)
Seth was 28 years old when he made his big league debut with the Cubs in June of 2017. He came into a tie game against the Rockies and proceeded to give up a single to the pitcher and a homer to Charlie Blackmon, and took the loss. He never pitched for the Cubs again.

~Brian McRae 1967– (Cubs 1995-1997)
The son of big league standout Hal McRae had a very respectable ten-year Major League career. He was an outstanding defensive center fielder with power and speed. One year with the Mets he was a 20/20 man. McRae was a valuable member of the team in his two years in Chicago. He hit .288 in ’95 and scored 111 runs in ’96, but he slipped to a .240 average in 1997 and was traded to the Mets along with Mel Rojas and Turk Wendell for Lance Johnson, Matt Clark, and Manny Alexander. In ten big league seasons he never made it to the postseason. 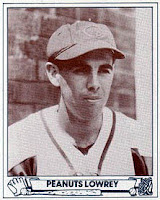 ~Peanuts Lowrey 1917–1986 (Cubs 1942-1949)
There are two stories about where he got his nickname. The first story is that it came from his grandfather, who described him as “no bigger than a peanut.” Peanuts was also a child actor, playing bit parts in silent films. The second story about his nickname origin is that actress Thelma Todd got him to perform with promises to buy him peanuts. Whatever the truth is, Peanuts played with the Cubs from 1942-1949, and was a starter on the 1945 World Series team. While the public and press called him Peanuts, his teammates gave him another nickname. They also called him Goober. Lowrey was a key member of the team in the 1940s. He played every position except first base, catcher, and pitcher, and made the All-Star team in 1946. Lowrey’s Cubs playing career ended in 1949 when he was traded to the Reds for Hank Sauer; one of the best trades in Cubs history. (Sauer won an MVP as a Cub.) After his playing days ended Lowrey returned to the Cubs as a coach in the 1970s. Peanuts never totally lost the acting bug either. He had a speaking part in The Winning Team, which starred Ronald Reagan as Grover Cleveland Alexander. (He plays a pitcher that beans Ronald Reagan.) The man he was traded for (Hank Sauer) also appeared in that movie.

~John Hairston 1944– (Cubs 1969)
Five Hairstons played big league baseball in Chicago. John’s father (Sam) and brother (Jerry) played for the White Sox, and his nephews (Jerry Jr. & Scott) later followed in his Cubs footsteps. Johnny Hairston has the distinction of being the first-ever second-generation African-American big leaguer. He was a September call-up during the infamous 1969 Cubs collapse. He got into four games as a catcher, left-fielder, and pinch hitter. His only hit came on September 18, 1969 — a squib single against Phillies pitcher Grant Jackson.

~Jim King 1932–2015 (Cubs 1955-1956)
King broke into the big leagues with the Cubs and got significant playing time in right field for two seasons. He hit 26 homers for the Cubs and was traded to the Cardinals in 1957 for Bobby Del Greco. King played eleven seasons in the big leagues, including five full seasons as a starter with the Washington Senators. (He hit for the cycle with the Senators on 5/26/64). He also played for the White Sox, Indians, and Giants, including the very first West Coast home game for the Giants in 1958.

~Marv Gudat 1903–1954 (Cubs 1932)
Marv was a backup outfielder/first baseman for the pennant-winning 1932 Cubs. He appeared in sixty games that year, and was part of the postseason roster. Gudat got two at-bats in the 1932 World Series against the Yankees. His last big league at-bat was a pop out to shortstop in Game 3. After the series he went out west and played another 13 seasons in the minors.

~Eddie Mulligan 1894–1982 (Cubs 1915-1916)
Mulligan got his start in the big leagues with the Cubs during their last season at West Side Grounds, and played his last season with them during their first year at Wrigley. He was predominantly a backup third baseman for Heinie Zimmerman, but he also played a little shortstop. Eddie later played for the White Sox and Pirates. 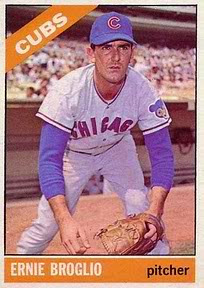 ~Ernie Broglio 1935–2019 (Cubs 1964-1967)
It’s too bad that Broglio’s name has become a punchline. He was actually a pretty good pitcher before the Cubs traded Lou Brock to get him. Broglio was a former 20-game winner and was coming off an 18-win year, but he was not happy to be traded to the Cubs. He never liked the day games because he felt the batters could see the ball better, and though he didn’t tell anyone, he was beginning to get arm problems. He won four games with the Cubs the second half of 1964, but his elbow blew up on him, and he won only three more games over the next two full years. (Photo: Topps 1966 Baseball Card)