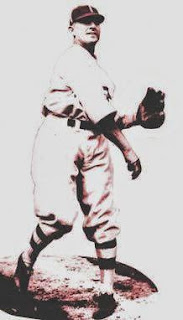 ~Jimmy “Scoops” Cooney 1894–1991 (Cubs 1926-1927)
Cooney was already 32 years old when he joined the Cubs in 1926, but he had only played parts of four major league seasons (two with the Cardinals, one each with the Red Sox and Giants). But the Cubs had no one else to play shortstop when they acquired him, so he was given the full-time job. During that 1926 season, he hit only .251, his on-base percentage was a woeful .288, and he had a whopping 24 extra base hits in more than 500 at-bats. Still, his glove kept him in the lineup. The following season (1927) he was still the starting shortstop when that glove made major league history. On May 30, 1927, in the fourth inning of a game against the Pirates, Cooney caught Paul Waner’s liner, stepped on second to double Lloyd Waner, and tagged Clyde Barnhart coming down from first, to record an unassisted triple play. No other National Leaguer would do it for the next 65 years. In 1992 (the year after Jimmy died), future Cub Mickey Morandini finally broke the streak by recording an unassisted triple play for the Philadelphia Phillies. How did the Cubs reward Cooney for his miraculous play? They traded him to the Pirates eight days later. Jimmy’s dad also played for the Cubs, and his brother Johnny played in the big leagues for 20 years in Boston, Brooklyn, and New York.

~Kurt Miller 1972– (Cubs 1998-1999)
Miller was a right-handed reliever who got a taste of the big leagues with the Florida Marlins before joining the Cubs. He got into a handful of games in 1998, and then made the club at the beginning of the 1999 season. However, he had a rough outing at the end of April against his former team, and injured his rib cage. He rehabbed in the minors at Iowa, before signing a contract to pitch in Japan.

~Dean Wilkins 1966– (Cubs 1989-1990)
Wilkins was born in the south suburbs of Chicago (Blue Island), but grew up in California. He came to the Cubs in the trade that sent Steve Trout to the Yankees. Wilkins got into eleven games during the Cubs playoff year of 1989, although he didn’t make the postseason roster. The following season, the right-handed reliever’s time in the big leagues was far less successful. He was rocked hard, and lost his command in seven appearances. He was sent to the Astros after the season.

~Butch Benton 1957– (Cubs 1982)
Butch was a first round draft choice of the Mets, but never blossomed into the starting catcher they envisioned he would be. The Cubs took a flyer on him after the Mets gave up on him, and he did get up to the big leagues for a very brief cup of coffee in 1982. He appeared in four games and hit .143. After the season the Cubs traded him to the Expos for future White Sox manager Jerry Manuel, who never played a game for Chicago.

~Frank Secory 1912–1995 (Cubs 1944-1946)
Secory was a reserve outfielder for the last Cubs team of the 20th century to make the World Series. He was a friendly guy who was well-liked by his teammates. They didn’t just like him because he was nice. They liked him because he had a habit of getting big hits in big games. He only got nine hits and six RBI for the 1945 Cubs, but a few of those managed to defeat the defending champion Cardinals. Frank got another cup of coffee with the Cubs in 1946, the last gasp of his big league career as a player. However, that was far from the end of his big league career. Frank became a big league umpire and had a very distinguished career. He umpired nine no-hitters, four World Series, and six All-Star games. He retired after the 1970 season.

~Beryl Richmond 1907–1980 (Cubs 1933)
Beryl was a left-hander who worked out of the bullpen for the 1933 Cubs. He was a 25-year-old rookie who gave up a lot of hits. He pitched briefly for the Reds the following season, and then finished up his career in the minor leagues. Some of his minor league seasons were legendarily bad. For instance in 1935, he won 3 games and lost 18.

~Lou Hardie 1864–1929 (White Stockings 1886)
Hardie played catcher, infield, and outfield for the 1886 champs. It was his only season in Chicago. He also played for Philadelphia, Boston, and Baltimore in his big league career.