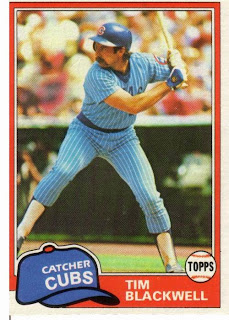 ~Tim Blackwell 1952– (Cubs 1978-1980)
With Blackwell on the roster from 1978-1980, the Cubs knew that they had someone who could hit against both lefties and righties (he was a switch hitter), and if necessary, he could also be an emergency understudy for any Wyatt Earp movie being filmed in the ballpark. He sported a 19th century-worthy bushy mustache. Unfortunately for the Cubs, Blackwell wasn’t much of a hitter (he hit .223, .164, .272, and .234 in his four seasons), and he made quite a few errors in the one season he played the most (1980). (Photo: Topps 1981 Baseball Card)

~Rocky Cherry 1979– (Cubs 2007)
Blessed with one of the great names in baseball history, Cherry was a journeyman pitcher who pitched out of the bullpen for the Cubs during their playoff year of 2007. Unfortunately for Rocky, he wasn’t around anymore when the team made it to the playoffs. He was traded in August for Steve Trachsel.

~Matt Franco 1969– (Cubs 1995)
Franco came up with the Cubs and got his first taste of the big leagues in 1995, appearing in 16 games. He was traded to the Mets the following year, where he put together a pretty good career as a backup outfielder and pinch hitter. Matt was very good in that pinch-hitting role for the Mets and Braves, before finishing his career as a full-time player in Japan.

~Gary Gaetti 1958– (Cubs 1998-1999)
The Cubs acquired the former World Series champ (Twins) for the stretch run in 1998. Gaetti came through with clutch hit after clutch hit. In only 27 games he hit 8 homers and batted .320. Unfortunately, he disappeared in the playoffs against the Braves. The Cubs gave him a shot to be their third baseman the following year too, but the lightning had been let out of the bottle. The 40-year-old was out of gas. He hit only .204 in over 300 plate appearances in 1999.

~Ike McAuley 1891–1928 (Cubs 1925)
The Cubs inexplicably gave the starting shortstop job to McAuley at the beginning of the 1925 season even though he hadn’t been in the big leagues for eight years, and hadn’t really played much when he was. McAuley didn’t play terribly. He hit .280 in the first 37 games, but he also made ten errors. The Cubs cut him loose in May. Ike passed away only three years later at the age of 36. 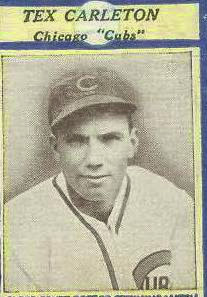 ~Tex Carleton 1906–1977 (Cubs 1935-1938)
Tex Carleton got his nickname because he hailed from Comanche, Texas and attended Texas Christian University. His real name was James. He pitched for two Cubs pennant winners (1935 and 1938) and had a pretty good run for the team, averaging about 13 wins a season in his four years in Chicago. He pitched eight shutouts for the Cubs, but he was also known for his wildness. In his only start in the 1935 series, he walked seven men and lost to the Tigers. He had an even worse 1938 series. He faced three batters, gave up a hit, two walks, two earned runs, two wild pitches, and didn’t retire anyone, officially ending the series with an ERA of infinity. The Cubs got rid of him after that series, and he resurfaced in Brooklyn for one more year in 1940. That season he threw a no-hitter for the Dodgers.