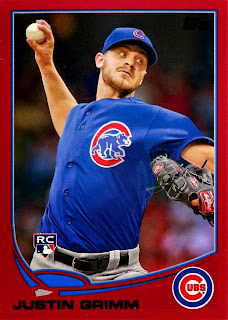 ~Justin Grimm 1988– (Cubs 2013-2017)
Grimm was acquired in the trade that sent Matt Garza to the Texas Rangers. Grimm was a fairly solid (if inconsistent) reliever for the Cubs during his five seasons in Chicago after having a rougher go of it as a starter for Texas. He also helped out the Cubs by being the official designated Catcher-of-the-Ceremonial-First-Pitch. The Cubs released him during spring training in 2018. (Photo: 2013 Topps Baseball Card)

~Terry Shumpert 1966– (Cubs 1996)
Shumpert had a 14-year big league career with stops in Kansas City, Boston, Colorado, San Diego, Tampa, and of course, the Cubs. He didn’t get a great deal of playing time with the Cubs. He appeared in 27 games and served as a backup infielder and pinch hitter. He really blossomed with Colorado after leaving Chicago. His best season in the big leagues was 1999. He hit 10 homers, stole 14 bases, and hit .347.

~Bret Barberie 1967– (Cubs 1996)
Barberie was a backup infielder for Montreal, Florida, and Baltimore before coming to the Cubs in 1996. He didn’t last the year in Chicago. By June he was sent back to Iowa, never to return to the big leagues.

~Damian Jackson 1973– (Cubs 2004)
The Cubs signed Damian at the end of spring training when he was waived by the Rockies and gave him a shot to backup second baseman Mark Grudzielanek. Jackson hit only .067 in his two months with the Cubs. They traded him to the Royals at the end of May. He didn’t show it with the Cubs, but Jackson had a productive eleven-year big league career.

~Martin Maldonado 1986 (Cubs 2019)
The veteran catcher was a Cub for exactly 15 days. He was acquired in the trade that sent Mike Montgomery to Kansas City on July 15th, and then was traded to the Houston Astros for Tony Kemp on July 31st. During his time in Chicago he came up to bat eleven times and didn’t register a hit. Don’t feel bad. It turned out well for Martin. Instead of ending his season with a dramatic collapse, his season ended in the World Series.

~Yu Darvish 1987– (Cubs 2018-present)
The Cubs signed Darvish to a huge 6-year contract before the 2018 season. He was coming off a World Series appearance with the Dodgers. But he started off slow in Chicago, and it got worse from there. By the end of his first season it was announced that he would be undergoing arm surgery. The Cubs paid $25 million for 8 starts, 1 win, and an ERA of 4.95. It took Yu a while to recover, but he did show flashes of brilliance during the 2019 season. He only won six games, but he struck out 229 batters, and showed pin point control with up to ten different pitches. Unfortunately for Yu, 33 of those pitches were hit out of the park.