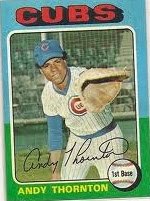 ~Andre Thornton 1949– (Cubs 1973-1976)
Andre was acquired from the Braves in the trade that sent Joe Pepitone out of Chicago. That turned out to be a good deal for the Cubs, because Andre turned into one of the top young sluggers in the National League. His nickname was “Thunder” and he hit 18 homers in his first full season as the Cubs first baseman (1975). Thunder seemed poised for even bigger things, but early in 1976 the Cubs traded him for Larry Biittner and Steve Renko. Andre went on to become a two-time All-Star. He hit 253 homers in 14 big league seasons, but only 30 of those were hit for the Cubs. (Photo: Topps 1975 Baseball Card)

~Corey Patterson 1979– (Cubs 2000-2005)
The third overall pick of the 1998 draft, Corey was a can’t-miss 5-tool prospect. He had power, speed, and played an outstanding center field. He certainly had flashes of greatness in a Cubs uniform, including an Opening Day when he drove in eight runs, but he also disappeared for weeks at a time, and had a very hard time mastering the strike zone. In 2003, he was having an All-Star caliber season when he got hurt. His injury forced the Cubs to go out and acquire Kenny Lofton — who arguably was the MVP of the Cubs the rest of that season. In 2004, Corey clubbed 24 homers and stole 32 bases, and it looked he had finally arrived. But in 2005, it all fell apart for him. Patterson hit a woeful .215 and had more strikeouts than hits. The Cubs shipped him off to Baltimore after the season for two minor leaguers who never made it to the big club. Patterson played another six seasons in the big leagues for the Orioles, Reds, Nationals, Brewers, Blue Jays, and Cardinals. His career numbers were very respectable (118 homers, 218 stolen bases, .252 average), but he never quite lived up to the lofty expectations. Corey’s father Don played in the NFL for the Giants and Lions, and his brother Eric was also a big league baseball player.

~Will Ohman 1977– (Cubs 2000-2007)
Ohman was a lefty reliever who experienced some severe arm troubles while he was a member of the Cubs. Those arm troubles caused him to undergo Tommy John surgery and miss the entire 2002-2004 seasons. When he finally returned to the big leagues as a situational lefty, he had some success. In 2005 Ohman appeared in 69 games for the Cubs and posted a 2.91 ERA. That was probably his best season in Chicago. He later also pitched for the Braves, Dodgers, Orioles, Marlins, and White Sox.