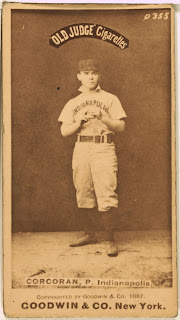 ~Larry Corcoran 1859–1891 (White Stockings 1880-1885)
In 1880 and 1881, Larry Corcoran was clearly the best pitcher in all of baseball. He was ambidextrous — he once pitched both left-handed and right-handed in a game. But the diminutive Corcoran (only 5’3″, 127 pounds) dominated the rest of the National League. In 1880, his rookie season, he won a whopping 43 games and led the league in strikeouts with 268, while registering a 1.95 ERA. The next season he was even better. His 31 wins led the league. Corcoran would have won the Cy Young Award if it existed yet. (Young wouldn’t pitch in the majors until 1890). Larry was great the next three years too (winning 27, 34, and 35 games respectively), but he was no longer quite as dominant as he was those first two years. During his time in Chicago, Corcoran threw three no-hitters, which would remain the record for most no-hitters until 1965 (when Sandy Koufax pitched his fourth…and it was against the Cubs). Corcoran died at the age of 32 of Bright’s Disease.

~Jimmy McMath 1949–2010 (Cubs 1968)
Jimmy was the youngest player in the big leagues (19) when the Cubs called him up in 1968. He only managed 2 hits in 14 big league at-bats. In many ways, Jimmy’s story was typical of Cubs draft choices from that era. He was a high school stud, drafted in the second round of the 1967 draft, and started off well in the low minors (hitting .388 for the Quincy Cubs). He worked his way all the way up to the big leagues in September of that year, but by the next spring began working his way back down the ladder. He went from AAA to Double-A, and then back down to Quincy. After the 1971 season he was released, and his career was over at the age of 22. The draft is an inexact science, to be sure, but that 1967 draft was stocked with future big leaguers. Here are a few other players taken in that same round of that same draft, and all of them were taken after McMath: Vida Blue (A’s), Jerry Reuss (Cardinals), and Don Baylor (Orioles).

~Bob Porterfield 1923–1980 (Cubs 1959)
Porterfield was a former 20-game winner and All-Star with the Washington Senators, but he was at the tail end of his career when he signed with the Cubs after being released by the Pirates. He appeared in four games and was rocked. After the Cubs cut him loose, the Pirates picked him up again and gave him one last chance. He retired after the 1959 season.

~Elmer Jacobs 1892–1958 (Cubs 1924-1925)
Jacobs was a right-handed journeyman pitcher who lasted nine seasons in the big leagues, including two with the Cubs. He was a part of the rotation in 1924, and won 11 games. The following season he was used mostly as a reliever, and didn’t have as much success. Jacobs also pitched for the White Sox, Phillies, Pirates, and Cardinals.