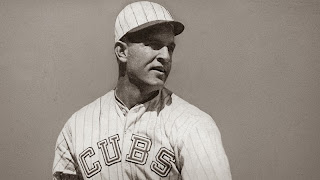 ~Hippo Vaughn 1888–1966 (Cubs 1913-1921)
Hippo Vaughn got his nickname because of his size (he was about the same size as Rick Reuschel). He is quite simply one of the best pitchers in Cubs history. He arrived in Chicago as a struggling big leaguer. He hadn’t quite been able to put it together during his years in New York and Washington (1908-1912), but he blossomed with the Cubs. He announced his arrival with a two-hitter in one of his first starts at the end of the 1913 season. By the following year, he was a 20-game winner. He followed that up with three more 20-win seasons over the next four. One of those wins was the last ever win at West Side Grounds. In 1917, Hippo was part of the famous double no-hitter game. Vaughn pitched a no-hitter for nine innings but lost the game in the tenth inning to another pitcher throwing a no-hitter, Fred Toney of the Reds. Jim Thorpe (yes, THAT Jim Thorpe) knocked in the winning run. The following season was Hippo’s masterpiece. He won pitching’s Triple Crown (wins, ERA, strikeouts) and led the Cubs to the World Series. The 1919 Black Sox may have believed the 1918 Cubs threw that World Series, but if they did, no one suspected Hippo Vaughn was part of it. He started three games in that series, and although he was only 1-2, his ERA was 1.00 and he struck out 17 batters. Hippo won the ERA title the following year too, and became a 20-game winner a fifth time, but after another 19 win season in 1920, one of the best pitchers in Cubs history had his career derailed by a Cubs Hall of Famer. In 1921 manager Johnny Evers suspended him for thirty days for insubordination. Hippo signed a contract with a semi-pro team to stay in shape, but Commissioner Landis suspended him indefinitely for that. It was technically against the rules because he was already under contract to the Cubs. (Vaughn was also stabbed by his father-in-law the same year…not a good year for Hippo.) Commissioner Landis was known as a bit of a hardliner, and he held the line against Vaughn for eight long years. He wasn’t reinstated until 1930. By then Hippo was 43 years old. He did try to make the team in spring training in 1931, but he didn’t have it anymore. There’s little doubt Hippo Vaughn would have been a Hall of Famer if his last years of productivity weren’t taken from him.
If there was a Cubs Hall of Fame, he’d be in it. Hippo is still in second place in Cubs career history with 35 shutouts. He’s one of only eight Cubs pitchers with 150+ career wins for Chicago, and he’s eighth on the all-time Cubs strikeout list.

~Claude Passeau 1909–2003 (Cubs 1939-1947)
Claude Passeau was the ace of the Cubs staff for several years. From 1940-1942 he pitched in the All-Star game every year. Just before the pennant-winning 1945 season started, Cubs doctors discovered that he had a chipped humerous from an old high school football injury. They told Claude that he’d be fine after four days of X-ray therapy, and boy were they right. He recovered nicely to have another very good year, tossing five shutouts, winning 17 games, and pitching the second greatest game in World Series history, a 1-hitter. Passeau toughed out one more 9 win season in 1946, but it was all over for him before the end of the 1947 season.

~Tiny Osborne 1893–1969 (Cubs 1922-1924)
His real name was Ernest Osborne, but he came by his nickname much the same way Curly Howard came by his. He was the opposite of Tiny. He was 6’4” and weighed 215 pounds. Tiny wasn’t much of a pitcher with the Cubs. He had a losing record in his three Cub seasons, but he did lead the league in one category in 1922: He hit 12 batters. We’re guessing nobody charged the mound.

~Ryan O’Malley 1980– (Cubs 2006)
The downstate native (Springfield) pitched in the Cubs organization for most of the ’00s and although he was never exactly dominant in the minors, he did get one shot at glory in 2006. The 26-year-old got two starts in August and pitched fairly well. In his first start, things got emotional. Per Yahoo! News:
O’Malley is one of just eight pitchers since 2000 to throw at least eight innings with zero runs allowed in his major league debut. That is some rare air. “It was one of the better pitched games the Cubs had that year,” Len Kasper said. “Just at the end, he hugged his dad and he had shaving cream all over his face, his dad had shaving cream on his face and he’s crying. We got really emotional in the booth. Right when I signed off, Bob and I were basically crying. I’ve never ever experienced that before as a broadcaster and I don’t know if I ever will again. That game, of the thousands I’ve called in my career, still stands out as one of my favorites.” O’Malley spent the next two years in the minors before hanging up his spikes at the end of the 2008 season.

~Blaise Ilsley 1964– (Cubs 1994)
Blaise pitched for the Cubs during the strike season of 1994. He was a 30-year-old rookie who had bounced around the minor leagues, and it didn’t go well with the Cubs. In ten appearances he registered an ERA of 7.80. After his playing days, he went into coaching, and continues to coach in the St. Louis organization.

~Mike Brumley 1963– (Cubs 1987)
Mike was acquired in the Eckersley for Buckner trade. He was a backup infielder who got quite a bit of playing time with the Cubs in his rookie season of 1987. The Cubs traded him to the Padres in the Goose Gossage trade (along with Keith Moreland), and Brumley went on to play seven more seasons in the big leagues with the Tigers, Mariners, Red Sox, A’s and Astros. Brumley was never a star, but how many people can say they were involved in trades with two Hall of Famers?

~Brian Dorsett 1961– (Cubs 1996)
The backup catcher played for six different teams in his big league career, the last of which was the Cubs in 1996. After his playing career ended, he moved back home to Terre Haute Indiana and opened up a car dealership.

~Jack Hendricks 1875–1943 (Orphans 1902)
His lifetime average as a Cub (then known as the Orphans) is one of the best in club history…he hit .571 for the team. Unfortunately, he only got seven at bats. He got another shot with the Senators the following season for one of the more unusual reasons in baseball history. He replaced Ed Delahanty, who fell to his death over Niagara Falls (after being kicked off a train for threatening passengers with a straight razor). After his playing career ended, Hendricks went into coaching. Jack managed the Reds and the Cardinals, although he never finished better than 2nd place. 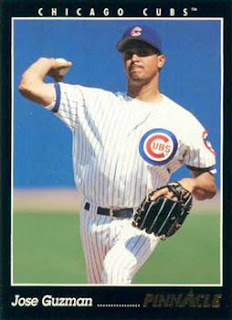 ~Jose Guzman 1963– (Cubs 1993-1994)
The Cubs signed Guzman as a free agent after a few successful seasons with the Texas Rangers. He was supposed to be the pitcher that helped Cub fans forget Greg Maddux because GM Larry Himes signed Guzman instead of re-signing Maddux. Needless to say, this was a horrible, horrible, (did we say horrible yet?) decision. Although, to be fair, Guzman looked good at first. On April 6, 1993, he came just one out away from throwing a no-hitter. Otis Nixon broke it up with a single. Guzman won 12 games in 1993 (while Maddux won the Cy Young with Atlanta), and then developed arm problems. 1994 was his last year in the big leagues. After his playing career ended he became a Spanish-language broadcaster for the Texas Rangers.
(Photo: 1993 Pinnacle Baseball Card)