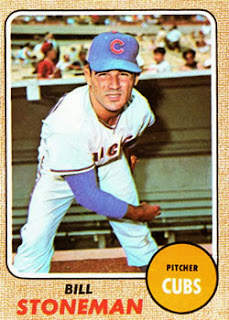 ~Bill Stoneman 1944– (Cubs 1967-1968)
Stoneman was a local Chicago-area boy (Oak Park) the Cubs drafted in 1966. By July of ’67 he was up with the big club, and pitched pretty well out of the bullpen. He saved four games and nearly struck out a man an inning. The following year the Cubs sent him to the minors to become a starter. Unfortunately, they left him unprotected in the expansion draft of 1968, and the Expos nabbed him. All Stoneman did for the Expos was throw two no-hitters (against the Phillies in April of 1969, and against the Mets in October of 1972) and pitch in the All-Star game (1972). After his playing career, he became the general manager of the Angels.

~Tom Phoebus 1942–2019 (Cubs 1972)
Phoebus was a member of the very impressive Baltimore Orioles starting rotation of the late 60s. He was a star right out of the gate. He threw shutouts in his first two big league starts and was named Sporting News Rookie of the Year in 1967. He won 15 and 14 games the next two years as well, tossed a no-hitter against the Red Sox, and won a game in the 1970 World Series. By the time he came to the Cubs in 1972, however, he was primarily a relief pitcher. He struggled with his control in Chicago, and the Cubs traded him to the Braves after the season for a career minor leaguer named Tony LaRussa. Not sure what happened to that LaRussa kid.

~Bobby Del Greco 1933–2019 (Cubs 1957)
Del Greco was a well-traveled veteran. During his nine year big league career, he played for six different teams. One of those teams (for a portion of the 1957 season) was the Cubs. Del Greco was mainly a centerfielder who was known for his ability to cover a lot of ground. He wasn’t much of a hitter (career .229 average), however, so he never really managed to claim a full-time job. With the Cubs he only got into twenty games and hit .200 before the Cubs traded him to the Yankees in September. The Yankees used him to fill in for Mickey Mantle late in games, so the Mick could rest those ailing knees.

~Richie Myers 1930–2011 (Cubs 1956)
Myers was a local boy (Elk Grove High School) who made the big leagues thanks to his speed. The Cubs used him as a pinch runner during the first month of the 1956 season. He scored one run. After the Cubs released him, Richie hung up his spikes. He was 26 years old and had already logged several years in the minors (as a shortstop mainly).

~Fred Lear 1894–1955 (Cubs 1918-1919)
When your last name is Lear, there’s a good chance that even the semi-literate baseball crowd will nickname you King, and that’s what happened to Fred. King Lear was a backup infielder during his two seasons in Chicago. He only had a cup of coffee with the 1918 pennant winners (two at bats), but then got the most extensive playing time of his career the following year. The Cubs traded him to the Giants in 1920.

~John Ganzel 1874–1959 (Orphans 1900)
Ganzel was a first baseman on the 1900 Cubs (then known as the Orphans). He hit .275 and drove 32 runs, but was better known for his glove work. He later played for the Giants, Yankees (where he hit the first HR in franchise history), and Reds. His brother Charlie and nephew Babe also both played big league ball. After his playing days, he became a big league manager with the Reds.

~David Bote 1993– (Cubs 2018-present)
Bote was called up to fill in for Kris Bryant during Bryant’s injury-plagued 2018 season. At first he took the league by storm, getting clutch hits and making great plays at third. By the end of the season, the pitchers had caught up to him, and he ended the season at .239. On the other hand, he will always be remembered for one incredible summer day, when he hit a walk-off grand slam homer in the bottom of the ninth against the Nationals to beat them 4-3. Before the 2019 season the Cubs signed him to a big multi-year deal. He showed promise at times (11 homers), but he also struggled in the field (15 errors), and struck out way too much (93Ks in 303ABs). That led to a stint in the minors.