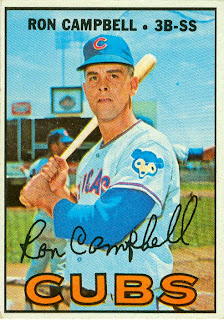 ~Ron Campbell 1940– (Cubs 1964-66)
Ron was mainly a backup infielder for the Cubs, but he did get one shot in the starting lineup. In September of 1964, he was the team’s starting second baseman. He hit fairly well (.272) and had several clutch hits (including six doubles, a triple, and a homer), but when 1965 began, the Cubs had a new second baseman in the starting lineup–Glenn Beckert. Campbell got a few tastes of the big leagues in ’65 and ’66, but he didn’t do as well. He played three more seasons in the minors after that, and retired from the game after the 1970 season at the age of 30. (Photo: Topps 1967 Baseball card)

~Jimmie Schaffer 1936– (Cubs 1963-1964)
Schaffer was catcher Dick Bertell’s backup in his two years with the Cubs. 1963 was his best season; Jimmie slugged seven homers in his limited role. He never hit more than two homers in any other season in his eight year big league career. Jimmie became a coach after his playing career ended, and was on the staff of the 1985 World Champion Kansas City Royals.

~Don Prince 1938–2017 (Cubs 1962)
Prince’s entire big league career consisted of exactly one inning pitched. He did it for the Cubs on September 21, 1962. The Cubs were playing the Mets at the Polo Grounds. Don faced four batters. He walked one, hit another one, and then faced future Cub Jim Hickman. Hickman grounded into a double play. The last batter Prince faced was Sammy Drake. He was easily retired, and Prince escaped with a perfect lifetime 0.00 ERA. After his playing career, in his golden years, Prince was sent to prison for hiring a hitman to murder two people. It wasn’t a hitman. It was an undercover cop.

~Greg Smith 1967– (Cubs 1989-1991)
Smith was one of those rub-some-dirt-in-it gritty infielders the Cubs hoped would develop into a starter. It just didn’t quite work out. He got a taste of the big time in September of 1989 at the tender age of 22, and then made the club out of spring training in 1990. Unfortunately he had some fielding problems that April, and they sent him back down to the minors. Smith was later traded to the Los Angeles Dodgers for Jose Vizcaino. After his playing career was over, he became a scout for the Indians and Rangers, and a special assistant to the Rangers’ general manager.

~Ross Gload 1976– (Cubs 2000)
Ross was a power hitting 1B/OF the Cubs acquired from the Marlins for Henry Rodriguez. He only got one chance to show his power in the big leagues for the Cubs, and the sample size was probably a little too small. In just over 30 at bats, he managed only one home run. The Rockies got him from the Cubs the following year, but Gload didn’t really put it together until he joined the White Sox. In 2005 he was part of that White Sox championship team. Gload eventually put together a very respectable 10-year big league career, which also included two playoff appearances for the Phillies (in 2010 & 2011)

~Ian Stewart 1985– (Cubs 2012-2013)
Stewart was one of the first players Theo Epstein acquired after being named Cubs president. Stewart cost the Cubs Tyler Colvin and D.J. LeMahieu, but Epstein figured that Ian had the talent to become the Cubs starting third baseman. Unfortunately, Stewart’s wrist never seemed to heal, robbing him of his best attribute–his power. Without the power, his low batting average was a major liability. Still, Stewart wasn’t officially let go by the Cubs until he posted some critical tweets. That’s what sealed his fate.

~Steve Clevenger 1986– (Cubs 2011-2013)
Steve was the team’s backup catcher at the beginning of the 2012 season and got off to a hot start. He was hitting .500 with 5 doubles (a few them game-winners) when he got hurt at the end of April. He came back later in the season, but the magic was gone. He ended the year hitting only .201. The Cubs included him in the Scott Feldman trade to the Orioles, which brought Jake Arietta and Pedro Strop to the Cubs. In 2016, as a member of the Mariners, during the hotly contested presidential campaign, he engaged in a series of racist Tweets, which caused him to be suspended for the rest of the season.
(Photo: 2012 Bowman Baseball Card)