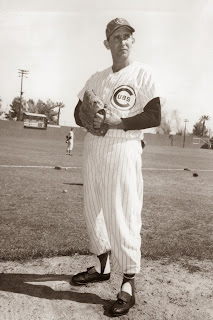 ~Freddy Rodriguez 1924–2009 (Cubs 1958)
Poor Freddy. Somewhere along the way he got on Mike Royko’s bad side. Every year in the 60s and 70s, Royko would print a Cubs Quiz making fun of some of the lesser Cubs of his lifetime, and Freddy was often featured. Royko liked to say that Freddy was undefeated as a rookie, which was true, but he followed that up with a notation that Freddy also didn’t win a single game, which was also true. Freddy was a Cub in April and May of 1958. His ERA was bad (over seven), but he saved two games before the Cubs cut him loose. In fairness to Rodriguez, the Cuban right-hander was a 33-year-old rookie who had pitched 18 seasons in the minors. Surely the team didn’t expect a lot from him.

~Frank Hankinson 1856–1911 (White Stockings 1878-1879)
Frank played in the big leagues for ten years, the first two of which were in Chicago. Over the course of his career he played every position except catcher. The Cubs (then known as the White Stockings) had him pitch and play third base and outfield. As a pitcher he won 15 games for the team in 1879 and didn’t allow a single home run in over 230 innings. As a batter, he finished tied for fifth in the league in homers. He hit one.

~Billy Petrick 1984– (Cubs 2007)
Petrick was a big right-hander (6’6″, 240 pounds) from Kankakee who worked his way through the Cubs system after being drafted in 2002. He got his one chance at the show in June and July of 2007, but appeared a bit overmatched by big league hitters. In only nine innings pitched, he gave up three homers, and had an ERA of 7.45. He pitched in the minor leagues until 2012.