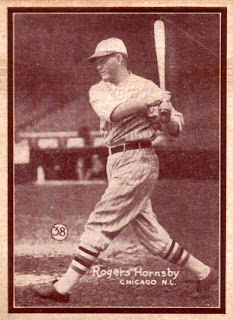 ~Rogers Hornsby 1897–1963 (Cubs 1929-1932)
It’s hard to imagine that one of the greatest players in history was not popular in Chicago–but Hornsby clearly was not. Hornsby had one great season for the Cubs, their World Series year of 1929, and he became the manager at the very end of the following year. Despite managing a notoriously rowdy team, he ruled with an iron fist. He didn’t just ban drinking (which, of course, was illegal at the time), he banned reading, movies, soda pop, smoking, and eating in the club house. He was so hated by his players that when the 1932 team won the pennant (after he was fired), the players voted to give him zero cents of a playoff share, even though he had been with the team for 4 months. Their hatred of him went much deeper than his strict rules. He was in deep debt to many of the players on the team. The Commissioner of Baseball, Judge Kennesaw Mountain Landis, became so alarmed by the reports he was getting about Hornsby, that he sent letters warning the team and the players about him. He also sent one to the NL President demanding any and all information he had about Hornsby’s gambling. Hornsby was defiant about it until the very end: “Gambling’s legal,” he would say. He never bet on baseball, only the horses. Probably influenced by Hornsby’s star power, Landis chose not to punish him. But his letters to the club led to an internal Cubs investigation. Team owner William Wrigley and team president William Veeck discovered that Hornsby had borrowed $11,000 from his own players. That’s when they fired him and replaced him with Charlie Grimm. Grimm led the 1932 team to the World Series. Hornsby never experienced the playoffs again. Later in life he was hired by Wrigley’s son Phillip to become the team’s first minor league batting instructor. The same prickly personality and inability to understand why people couldn’t naturally hit as well as he did, however, made him as lousy at that job as he was as a manager. As a player Rogers Hornsby had very few peers. His lifetime batting average is .358. He hit .400 three different times. He narrowly missed it a fourth time (.397). He won two MVP awards, two triple crowns, and seven batting titles. And he did all that while gambling away nearly every dime he earned.

~Joey Gathright 1981– (Cubs 2009)
Gathright was a speedster who stole nearly 80 bases in the five seasons before coming to the Cubs (in limited playing time). With the Cubs his playing time was even more limited. They just couldn’t find a spot to play him, so they traded him to the Orioles for Ryan Freel in May of 2009.