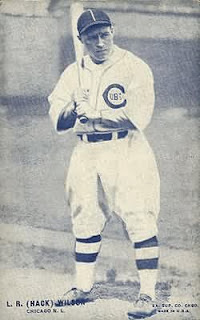 ~Hack Wilson 1900–1948 (Cubs 1926-1931)
Hack is still remembered for his record 1930 season when he drove in 191 runs, but during his Cubs days he was known for more than just slugging the baseball. He was known as a notorious hell raiser. Wilson had several run-ins with the law, his teammates, opposing players, and even fans. He was arrested for violating the Prohibition Act in 1926, but he was just getting started. Hack and his drinking buddy/teammate Pat Malone got into a fistfight in a hotel because they thought somebody was laughing at them. In 1928, he was fined after charging into the stands to fight with a heckler. Gabby Hartnett and Joe Kelly had to physically remove him off the fan–and thousands of fans swarmed the field. Hack once charged into the opposing dugout to punch a Reds pitcher…after Hack hit the ball. He was tagged out in the dugout. That same night he punched another Reds pitcher in the team train. A famous story, which may or may not be a legend, involved Cubs manager Joe McCarthy and Hack.
To show Hack the dangers of drinking, Joe took a worm and dropped it in a glass of whiskey. The worm quickly died. “Now what does that prove?” asked Joe. Wilson thought about it for a while and replied, “It proves that if you drink whiskey, you won’t get worms!” Through it all, Hack was the most feared hitter in the National League. Hack still holds Cubs career records for best on-base percentage (.492), slugging percentage (.590) and OPS (1.002). He led the league in homers four years in a row, in walks and RBI twice, and led the Cubs to the World Series in 1929. For many years he held the single season home run record (56), and he still has the single season RBI record (191). But in 1931, things started to go south. Hack and player/manager Hall of Famer Rogers Hornsby didn’t get along and were constantly at odds. It got so bad, that the Cubs traded Hack to the Dodgers for Burleigh Grimes. Hack had one more good year with the Dodgers, but the end was near. He retired after the 1934 season. Near the end of his Wilson’s life he appeared on a network radio show where he spoke about the effects of “Demon Rum.” This was just a few months before his death on November 23, 1948. He was only 48. His body was unclaimed for three days before National League president Ford Frick paid for the funeral. The veterans committee named Hack to Baseball’s Hall of Fame in 1979.

~Kosuke Fukudome 1977– (2008-2011)
When Kosuke arrived in 2008, he was hailed as the savior. The Cubs had outbid several other teams also trying to sign the Japanese League batting champion. At first, he looked pretty good. Kosuke homered on opening day to tie up the game in the bottom of the ninth, hordes of Japanese media members followed him wherever he went, and Fukudome was named to the All-Star team. After that, reality set in. Kosuke couldn’t handle the outside pitch, and would corkscrew himself into the ground trying to reach it. He completely disappeared in the 2008 playoffs, going 1 for 10. Fukudome averaged about 10 homers and 40 RBI in his time with the Cubs, and never hit better than .263.

~Curt Wilkerson 1961– (Cubs 1989-1990)
The Cubs acquired Wilkerson in the trade that sent Rafael Palmeiro and Jamie Moyer to the Rangers and brought Mitch Williams to Chicago. He was a key bench player on the 1989 division winner, backing up Ryne Sandberg, Shawon Dunston, and Vance Law. He played in three of the five playoff games against the Giants that postseason. The Cubs let him go after the following season, and he later played for the Pirates and Royals.

~Bob Zick 1927–2017 (Cubs 1954)
Zick had a cup of coffee with the Cubs during the 1954 season. He was on the roster multiple times that year (he came up in May and September), but Bob didn’t get many chances to show his stuff on the mound. He pitched in eight games and was knocked around (8.27 ERA) by big league hitters. It was his only stint in the majors, and he was 27 years old. The University of Illinois grad pitched one more year in the minors before hanging up his spikes.

~Ron Northey 1920–1971 (Cubs 1950, 1952)
Ron played 12 seasons in the big leagues and had a couple of very good seasons for the Phillies (before the war) and the Cardinals before joining the Cubs. The Cubs acquired him in June 1954 for Bob Scheffing. He played quite a bit of right field the second half of that season, splitting time with Bob Borkowski. Northey went into coaching after his playing days. He was on Danny Murtaugh’s staff in Pittsburgh when he died unexpectedly in 1970 at the age of 50.

~Irv Higginbotham 1882–1959 (Cubs 1909)
Higginbotham was an effective relief pitcher for the Cubs (2.19 ERA) in his final big league season (1909). Unfortunately for Irv, his timing was less than ideal. If he had arrived in any other year that half-decade he would have been part of a pennant-winning team. The 1909 crew fell just a little short. After his playing career he became a house painter.