~Jacob Rubenstein 1911 (Cubs fan 1911-1967)
Cub fan Jacob Rubenstein was born in Chicago; one of eight children of Jewish parents who had immigrated from Poland. He didn’t have a happy childhood. His parents divorced when he was 11. By the time he was 14, his mother was committed to a mental institution, and he was on his own. Despite his hardscrabble life, Jacob followed the Cubs. In fact, they brought him his first real chance at earning a living. Jack made it through eighth grade, then “found himself on Chicago streets attempting to provide for himself and other members of his family,” as a famous government report put it. He earned money by scalping tickets to sporting events and by selling sports-related novelties, such as Cubs banners. He remained in Chicago until 1947. During his years as a Cubs fan/entrepreneur, the Cubs appeared in six World Series. But Jacob isn’t really known for his days in Chicago. He’s better known for his days in Dallas, Texas, and for one particular day at that; the day after John F. Kennedy was assassinated. That famous government report was called “The Warren Commission Report” and by the time he was mentioned in it, Jacob Rubenstein was known the world over by the name he adopted in adulthood; Jack Ruby.

~Erik Pappas 1966– (Cubs 1991)
Pappas a was local boy (Mt. Carmel High School) who came up as a catcher, and got a cup of coffee with the Cubs in April of 1991. He later went to the Cardinals, and they moved him to the outfield. In 2004, he played in the Olympics for the Greek National team. Pappas later became a coach in the Cubs minor league system.

~Dave Owen 1958– (Cubs 1983-1985)
Owen was a backup infielder for the Cubs three seasons in the mid-80s. He will always be remembered for getting the winning hit in the famous Ryne Sandberg game against the Cardinals in the summer of 1984. Sandberg may have tied the game with homers against Bruce Sutter in the 9th and 10th, but Owen was the one who knocked in the game winner. Dave later played for the Royals. His brother Spike was also a big leaguer.

~Roy Parmelee 1907–1981 (Cubs 1937)
Parmelee came to the Cubs in the ill-considered trade that sent Lon Warneke to St. Louis in 1937. The ’37 Cubs sure could have used Warneke. He finished with 18 wins for the Cardinals, and won 77 games for them over the next four years. Parmelee was gone the next year, and the other player the Cubs acquired (Rip Collins) lasted two years. Parmelee’s final record for the Cubs was 7-8, with an ERA over five. On the other hand, he had a great nickname. Parmelee is one of three Cubs in history who were nicknamed Tarzan.

~Red Thomas 1898–1962 (Cubs 1921)
Thomas’ entire big league career consisted of eight games played in September of 1921. The 23-year-old centerfielder knocked in five runs and played a strong centerfield, but he never got another shot at the big leagues.

~Marty Shay 1896–1951 (Cubs 1916)
Shay played for the Cubs during their first season at Wrigley. The young shortstop played in exactly two games and went 2 for 7 (both singles). He was only 20 at the time. By the time he returned to the majors with the Boston Braves, he was 28.

~Fred Haney 1896–1977 (Cubs 1927)
Haney had three at bats in four games with the Cubs in 1927, and didn’t get on base. As a manager, he led the Milwaukee Braves to two World Series in a row, winning it all in 1957, and losing to the Yankees in 1958. Despite his championship, he wasn’t considered a great manager. Baseball historian/statistician Bill James says that Haney had one of the worst seasons as a manager in baseball history in 1959. The stacked Braves lost the NL to the vastly inferior Los Angeles Dodgers, largely (according to James) because of Haney’s mistakes. 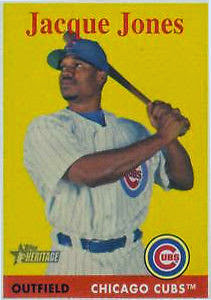 ~Jacque Jones 1975-– (Cubs 2006-2007)
Jones had a very respectable ten year big league career. He hit more than 150 homers, stole over 80 bases, and played a very good right field. He signed a three year contract as a free agent with the Cubs in 2006, and his first year was actually quite good. He hit 27 homers with a .285 average. But Dusty Baker was fired after that season, and Jones had a big problem with that. He asked to be traded. The Cubs obliged him in 2007, and his career was over shortly thereafter. Jones never connected with Chicago fans. (Photo: 2007 Topps Heritage Baseball Card)