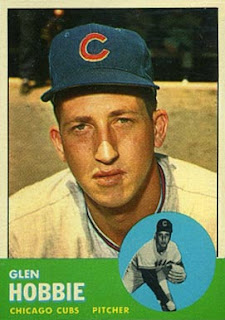 ~Glen Hobbie 1936–2013 (Cubs 1957-1964)
Hobbie was part of the Cubs rotation in the late 50s and early 60s; one of the worst stretches in Cubs history. Hobbie’s lifetime record was nearly twenty games under .500, and he lost twenty games in one season (1960), but he did have some moments of brilliance in a Cubs uniform. He threw eleven shutouts for the Cubs, and won 16 games in two different seasons. He worked for the Roller Derby Association after he retired from baseball. (Photo: Topps 1963 Baseball Card)

~Welington Castillo 1987– (Cubs 2010-2014)
The young Dominican was the starting catcher for the Cubs from 2012-2014. He showed some glimpses of power, but he mainly started for the Cubs for his defensive abilities. He led NL catchers in errors in 2013, but he also threw out 28 baserunners trying to steal–second best in the league. The Cubs traded him early in the 2014 season after signing free agents Miguel Montero and David Ross.

~Will Cunnane 1974– (Cubs 2002)
Will had already pitched in the big leagues for five years (with the Padres and Brewers) before joining the Cubs in 2002. He pitched out of the bullpen and didn’t have a tremendous amount of success in Chicago. The following year, as a member of the Atlanta Braves, he pitched against the Cubs in the National League Divisional Series. At the time, it was the only playoff series the Cubs had won since 1908.

~Herman Segelke 1958– (Cubs 1982)
In 1976, three future Cubs were drafted in the first round by other teams drafting after the Cubs (Steve Trout, Leon Durham, and Pat Tabler) while the Cubs picked Herman Segelke. If Herman hadn’t been the seventh overall pick of the draft, he probably never would have gotten a cup of coffee in the big leagues. His lifetime minor league ERA was over five. Segelke pitched in three games for the 1982 Cubs and was lit up. He gave up six hits, six walks, a homer, and four runs in only four innings pitched.

~Ken Penner 1896–1959 (Cubs 1929)
When Penner joined the Cubs in 1929, he hadn’t been in the big leagues since 1916, one of the longest such streaks in baseball history. He was a pitcher. Ken was essentially a minor league lifer. He pitched 27 seasons in the minor leagues, and didn’t hang up his spikes until he was 47 years old. After that he became a scout in the Cardinals organization.