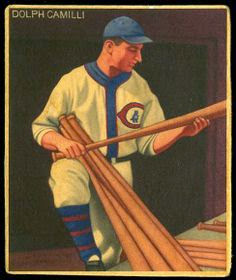 ~Dolph Camilli 1907–1997 (Cubs 1933-1934)
After Cubs owner William Wrigley and team president Bill Veeck Sr. died, the club was handed to an inexperienced fish wholesaler named William Walker. He traded Dolph to the Phillies for Don Hurst. Camilli went on to hit over 200 home runs, made two All-Star teams, and led the 1941 Brooklyn Dodgers to the World Series. He won the MVP that year too. Cubs fans might have been forgiven if they found themselves rooting for the Brooklyn Dodgers in the 1941 World Series. Seven ex-Cubs led that Brooklyn team to the National League pennant. Dolph Camilli played first base. Billy Herman played second. Augie Galan was an outfielder. Kirby Higbe won 22 games. Hugh Casey won 14 games. Larry French pitched valuable innings out of the bullpen, and Babe Phelps was a backup catcher. (Photo: Helmar Baseball Art Card Company)

~Ray Starr 1906–1963 (Cubs 1945)
Ray Starr earned the nickname Iron Man by pitching both ends of more than 40 minor league doubleheaders during his 20-year career. One of his memorable quirks? Each season he pitched fastballs and curves for two hours on the first day of spring training. (Modern Day pitching coaches faint at the mention of this ritual). As a wartime pitcher with the Reds, Starr won 15 games in 1942, and made the All-Star team. But that was really his only good year. The Cubs picked him up from the Pirates during their pennant winning 1945 season, but Iron Man didn’t exactly pitch well. His ERA was 7.42. Starr gave up 17 hits and 7 walks in just 13 innings with the pennant winning Cubs. He retired after the 1945 season.

~Carlos Silva 1979– (Cubs 2010)
Silva was picked up in a bad-contract-for-bad-contract trade with the Seattle Mariners. The Mariners took the troubled Milton Bradley, and the Cubs took Silva. It’s safe to say the Cubs got the better of the deal, even if there were no real winners here. Silva won his first eight decisions with the Cubs before developing arm problems. The Cubs cut ties with him during spring training 2011.

~Emilio Bonifacio 1985– (Cubs 2014)
The veteran utility man was brought in to lead off and play centerfield for the Cubs, and he got off to a good start before getting injured. After he came back from injury, he wasn’t quite as effective. By the time he was traded to the Braves at the trading deadline, his average was down to .279.