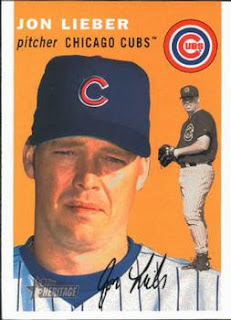 ~Jon Lieber 1970– (Cubs 1999-2003, 2008)
When the Cubs acquired Lieber from the Pirates for Brant Brown, it was one of the best deals they ever made. Lieber anchored the rotation, winning 10, 12, and 20 games in his first three seasons. No Cub pitcher won 20 games again until Jake Arrieta did it in 2015. One day during a rain delay in Lieber’s fourth season with the Cubs, Jon volunteered to come back out again when the game resumed. He did, but he was never the same after that. He eventually missed the entire 2003 season recovering from arm surgery. Lieber did come back and pitch a few more seasons for the Yankees and Phillies before finishing his career on the north side in 2008. (Photo: Topps 2003 Heritage Baseball Card)

~Jack Harper 1878–1950 (Cubs 1906)
Harper may be the greatest example of “what goes around, comes around” in baseball history. In 1904 when he was a pitcher with the Reds, Harper beaned Cubs first baseman Frank Chance several times. One time he knocked him out cold. Chance didn’t get mad, he got even. By 1906 Chance was calling the shots for the Cubs. He contacted the Reds to see if they would be interested in trading Harper. Sure enough…they traded him to Chance. Frank let him start one game, pulled him in the first inning, and let him fester on the bench for the rest of the year. Harper never pitched in the big leagues again.

~Joe Stanley 1881–1967 (Cubs 1909)
Stanley was only 16 years old when he got his first taste of the big leagues with the Washington Senators in 1897 and struck out in his only at bat. But he hung in there and eventually played for the Boston Braves for several seasons. Stanley came to the Cubs in his final year in the big leagues as a grizzled 28-year-old veteran. He hit .135 in limited time in the Cubs outfield that year, but played alongside the stars that comprised the Cubs dynasty.

~Art Ceccarelli 1930–2012 (Cubs 1959-1960)
The Korean War veteran pitched in parts of five big league seasons, but his best season came with the Cubs in 1959. That season he went 5-5, hurling four complete games, and two shutouts. Unfortunately for Art, he was nearly 30 years old at the time, and when he got off to a slow start the following season, the Cubs released him. He pitched in the minors a few more years, but never made it back up to the big leagues.

~Dick Radatz 1937–2005 (Cubs 1967)
Dick Radatz was power-pitching reliever, and a former fireman of the year. His towering presence and 95-mile-per-hour fastball made him baseball’s most dominant relief pitcher in the mid-1960s and earned him the unforgettable nickname of “The Monster” when he was with the Red Sox. He also pitched for Cleveland, but by the time the Indians sent him to the Cubs, he didn’t have much left. He had lost the movement on his fastball, tried to become a finesse pitcher, and just couldn’t do it. His ERA with the Cubs was 6.56. He pitched one season for Chicago in ’67, and was released before the season in 1968.

~Hector Cruz 1953– (Cubs 1978,1981-1982)
Heity, as he was called by his teammates, came from a baseball family. His older brother Jose was a star for the Astros, his cousin Tommy got a cup of coffee with the White Sox, and his nephew Jose Jr. had a 12-year big league career. Hector had a few good years with the Cardinals in the mid-70s, but by the time he came to Chicago, he was a mainly a backup. His best year in Chicago was probably 1981 when he hit seven homers. When Cruz was inducted into the Caribbean Baseball Hall of Fame in 2007, he was working as a mailman on the north side of Chicago.

~Hisanori Takahashi 1975– (Cubs 2013)
His name in Japanese is spelled this way: (高橋 尚成.) He earned a spot on the opening day roster in 2013, but by mid-April he was traded to the Rockies. Takahashi only pitched in three games for the Cubs. His best year in the big leagues was probably his first season with the Mets (2010) when he won ten games.

~Al Nipper 1959– (Cubs 1988)
Sure the Cubs gave up one of the all-time greatest relief pitchers (Lee Smith) to get him, and sure Al only had 2 wins and walked more batters than he struck out in 1988, but there’s no getting around the fact that Nipper had a killer mustache. That’s just a fact. The Cubs released him during spring training of 1989.