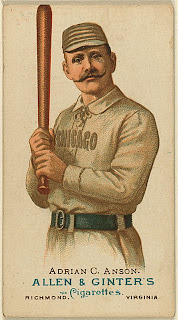 ~Cap Anson 1852–1922 (White Stockings 1876-1897)
He still holds Cubs career records for most hits, most runs, most doubles, most RBI, and highest batting average (with 2000 or more at bats). Anson is quite simply the greatest player in Chicago Cubs history, and probably the most important player in 19th century baseball. Cap was 45 years old when he retired in 1897, and was famous all over the country. He toured as a Vaudeville Act, drawing big crowds wherever he went. He had business cards made up that read: “Greater Actor Than Any Ballplayer, a Greater Ballplayer Than Any Actor,” according to the book Cap Anson: The Grand Old Man of Baseball by David Fleitz. During his retirement he was treated as royalty in Chicago. One of his biggest fans was President Warren G. Harding. Harding even invited Anson to the White House. In 1939, seventeen years after his death, Cap Anson was inducted into the Hall of Fame. However, that’s only part of Anson’s legacy, and the rest of the story isn’t pretty. In 1882 in a game against Toledo, Anson demanded that a player be taken out of the game because he was African-American. Five years later, Anson refused to allow his team to take the field if a black player was on the opposing team. The Giants tried to sign an African-American player, and Anson led the charge in getting the other owners from blocking that move and any other move that would have allowed African-Americans to play. In essence, Anson was the reason for the color line in baseball. To be fair, the ban wouldn’t have happened if the other owners and players weren’t also racist, but Anson was the most vocal, and he was the biggest star in the league, so nobody wanted to defy him. He hated “darkies,” as he called them. He actually thought he was magnanimous toward African-Americans because he hired a “little coon who could handle a baton” (his words) to be the team mascot. As great of a player as he was, Cap Anson left a stain on this great game, a stain that wasn’t erased in the league until 1947, and in Chicago until 1953.

~Tom Needham 1879–1926 (Cubs 1909-1914)
Needham was born in Ireland and came to this country as a youngster. Deerfoot, as he was called, joined the Cubs in the midst of their historic run to be the backup catcher to Johnny Kling, and then Jimmy Archer. He even got to bat in the 1910 World Series against the A’s. Deerfoot was known as a good defensive player, but never hit well (career average was .209). He played six seasons with the Cubs, but didn’t quite last long enough to play in the new ballpark. In his last few years with the Cubs Needham was a player/coach. He later became the pitching coach for the White Sox.

~Scott Perry 1891–1959 (Cubs 1916)
Scott was a right-handed pitcher, and part of the Cubs staff in the first season they played at Wrigley Field. He won 2 games toward the end of the season as a starter. The following year he was pitching in Cincinnati, with limited success. It wasn’t until he joined the Philadelphia Athletics that Perry came into his own. In the war-shortened year of 1918, Scott Perry became a twenty game winner.

~Morrie Schick 1892–1979 (Cubs 1917)
Schick was a local Chicago boy who could really pick it as an outfielder, but simply couldn’t hit big league pitching. He was 24 when played with the Cubs in 1917, and hit only .147. Morrie knocked around the minors for nine seasons after that but never made it back up to the big time.

~Bob Osborn 1903–1960 (Cubs 1925-1930)
Osborn pitched for the Cubs during one of the big hitting eras in major league history. He got a cup of coffee with the team during their pennant winning year, but his best season was 1930–a notoriously tough year for pitchers. Osborn won 10 games that year for the Cubs.

~Roberto Pena 1937–1982 (Cubs 1965-1966)
Pena was a backup infielder with the Cubs, and even though he was a 27-year-old rookie, he was nicknamed Baby. Pena wasn’t much of a hitter (.245 lifetime average), but his glove kept him in the big leagues until he was 34. He also played for the Phillies, Padres, A’s and Brewers. He died in his native Dominican Republic at the age of 45.