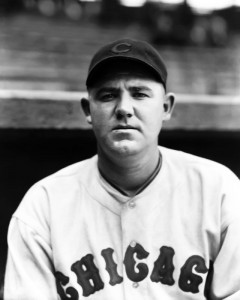 ~Babe Phelps 1908–1992 (Cubs 1933-1934)
His real name was Ernest Phelps, but he was known as Babe throughout most of his big league career. He was also known as Blimp when he played for the Cubs; a tribute to the hefty 225 pounds he carried on his frame. Phelps was a rarely used backup catcher for the Cubs in the early 30s, biding his time on the bench behind Hall of Famer Gabby Hartnett. The Cubs didn’t think they needed Blimp, so they released him after the 1934 season. The Brooklyn Dodgers snatched him up pretty quickly, and Blimp officially became the Babe. Babe Phelps went on to become a three-time All-Star catcher for the Dodgers. His .367 average in 1936 was the highest ever for a catcher who qualified for the batting title. Unfortunately for the Dodgers, he was also a hypochondriac, and had a horrible fear of flying. Those two factors contributed to ending his major league baseball career prematurely. Phelps retired at age 34 with a lifetime batting average of .310.

~Tommy Sewell 1906–1956 (Cubs 1927)
Tommy had exactly one big league at bat. It came on June 21, 1927 at Sportsman Park in St. Louis. Tommy pinch hit for Cubs pitcher Percy Jones in the seventh inning against Cardinals pitcher Flint Rehm. Unfortunately for Tommy, Flint was a 20-game-winner that season. Sewell didn’t get on base and never got another chance in the big leagues. After that he played in the minor leagues for another four years before hanging up his spikes. Tommy couldn’t even brag about his big league experience when he came home to Alabama. His brother Joe was a Hall of Famer, another brother Luke also played in the big leagues, and so did his cousin Rip.

~Ed Winceniak 1929– (Cubs 1956-1957)
Ed was a local Chicago boy (Bowen High School), and a utility infielder during his time with the Cubs (his only time in the big leagues). He was used as a defensive replacement, pinch hitter, and pinch runner. His lifetime average was .209, and he hit one homer. The pitcher who served it up was former Cub Hal Jeffcoat.

~Frank Fernandez 1943– (Cubs 1971-1972)
Frank was a catcher for the Cubs and a few other teams in his big league career, and while he was never good enough to play regularly, he does have a few very odd records. For instance, he has the most homers for a player with a career average below .200 (39), and he had more walks in his big league career than hits, and he had more than a hundred of each (164 walks, 145 hits).

~Antonio Alfonseca 1972-– (Cubs 2002-2003)
He was nicknamed El Pulpo in Spanish (the Octopus) because he was born with an extra digit on his hands and feet. Antonio Alfonseca was the fireman of the year for the Marlins two seasons before he came to Chicago. The Cubs traded an unknown young pitcher named Dontrelle Willis to get him, but the Octopus really stunk up the joint in a Chicago uniform. Audible groans could be heard from the Wrigley faithful each time he walked toward the mound. He did, however, pitch well for the Cubs in the 2003 playoffs (believe it or not).

~Albert Almora Jr. 1994– (Cubs 2016-present)
Almora made his debut during the Cubs World Series championship season, and even made the postseason roster. He was the first draft pick in the first draft conducted by the current Cubs front office, and though it took him a few years to make it to the big leagues, he was still only 22 when he wore that Cubs uniform for the first time. In 2017, Almora took a big step forward, becoming a regular part of the outfield rotation. He batted .298 in over 300 plate appearances and excelled in the postseason. He became the starting center fielder in 2018, but after a stellar first half, slumped badly in the second half of the season. He finished up at .286, with mediocre power numbers (5 HRs, 41 RBI). His power surge in 2019 (12 homers) may have been due to the juiced ball used during that season. Albert’s cousin is big leaguer Manny Machado.