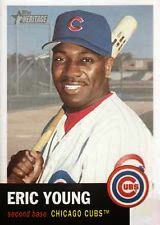 ~Eric Young 1967– (Cubs 2000-2001)
EY was acquired from the Dodgers in 2000 in a very good trade for the Cubs. The Cubs got a starting second baseman and a starting pitcher (Ismael Valdes) in exchange for a relief pitcher (Terry Adams). Young was a dynamic leadoff man. In 2000, he hit .297 and stole 54 bases. His totals went down a bit the following season, and the Cubs let him go in free agency. EY can now be seen on ESPN’s Baseball Tonight and his son Eric Young Jr. followed in his big league footsteps. EY still shares a Cubs record (with Cliff Heathcote) for reaching base seven times in a single game. (Photo: 2002 Topps Heritage Baseball Card)

~David Patton 1984– (Cubs 2009)
Patton was a Rule V draft choice, who pitched in the Cubs for part of the 2009 season. He made twenty appearances and won three games, but also registered an ERA of 6.83. He never made it back up to the big leagues.

~Rich Garces 1971– (Cubs 1995)
Rich only pitched for the Cubs for two months in 1995. He appeared in seven games and posted a 3.27 ERA. Garces was nicknamed “El Guapo” by former teammate Mike Maddux because he looked like the villain in the movie The Three Amigos. After he left the Cubs he became a pretty good reliever for the Red Sox. He pitched in the big leagues until 2002.

~Randy Rosario 1994– (Cubs 2018-2019 )
The Cubs claimed the young Dominican off waivers from the Minnesota Twins, and he became a key part of their bullpen during the 2018 season. The lefty appeared in 44 games and posted a 3.66 ERA.In 2019 he wasn’t nearly as effective and was released in September. In a classy move, Rosario took out an ad to thank the Cubs fans for their support during his time in Chicago. He was picked up shortly thereafter by the Royals.