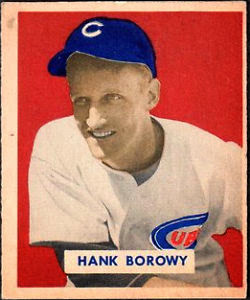 ~Hank Borowy 1916–2004 (Cubs 1945-1948)
He had won 17, 14, and 15 games in his three previous seasons with Yankees, and had already won 10 games in 1945 when the Cubs acquired Hank. Borowy was 29 years old and in the prime of his career. People thought the Yankees had lost their minds. After Borowy joined the Cubs he became even better. For the rest of 1945 he was absolutely unhittable. He went 11-2 the rest of 1945, with an ERA of 2.13. He also shut out the Tigers in Game 1 of the 1945 World Series, and won Game 6 with a heroic effort in relief. Don’t ask what happened in Game 7, when he volunteered to start despite pitching several innings the day before. Let’s just say he didn’t pull a Josh Beckett. After 1945, when all the players returned from the war, Borowy was exposed as an average pitcher, so maybe the Yankees knew what they were doing after all. By the time he left the Cubs after the 1948 season, he was only two games over .500 for the team (36-34), which means he went 25-32 after his amazing 1945 season.
(Bowman 1949 Baseball Card)

~Blake Lalli 1983– (Cubs 2012)
Lalli made a very brief stop in Chicago. He went 2 for 15 for the Cubs in May of 2012, with 2 RBI. His first at bat was in a Cubs/Sox game (won by the Sox). He grounded out to the shortstop in the ninth inning for the second to last out of the game. The catcher/first baseman moved on to the Diamondbacks organization after his time with the Cubs.

~Mark Clark 1968– (Cubs 1997-1998)
Clark was acquired along with Lance Johnson during the woeful 1997 Cubs season in exchange for Brian MacRae, Mel Rojas, and Turk Wendell. It actually turned out to be a good trade for the Cubs because both Clark and Johnson were key contributors during the playoff year of 1998. Clark started Game 1 of the NLDS against John Smoltz and the Atlanta Braves. He pitched a solid game but the bullpen exploded after he left the game in the seventh inning. The Braves won 7-1. Mark finished his big league career with the Rangers.

~Casey Hageman 1887–1964 (Cubs 1914)
Casey was not a typical pitcher in many ways. When he was a minor league pitcher in 1909, he killed a batter with a pitch. He never totally got over that. He was also a rebel. In 1912 he was sent to the minor leagues by the Red Sox, and he refused to go. That led to an early challenge of baseball’s reserve clause and made him an undesirable, despite his great promise. The Cubs gave him another shot in 1914 when they still played at West Side Grounds. He won one game and saved another, and pitched respectably for the club. But there was another way that Casey was far from a typical relief pitcher. He batted 15 times, and his average was an astounding .467. After the season he and the Cubs couldn’t come to an agreement on a contract, and he quit big league baseball for good at age 27.

~Harry Truby 1868–1953 (Colts 1895-1896)
Harry’s nickname was one of the all-time greats. His teammates called him Bird Eye. Bird Eye was the backup second baseman in 1895 and 1896 for Ace Stewart. The first year he hit .336. The second year his average dropped more than a hundred points to .234, and he was shipped off to the Pirates on July 4th. After finishing the year with Pittsburgh, Harry never made it back up to the big leagues again.