September 12, 1998
Sammy Sosa becomes the first Cubs player to hit 60 home runs in a season. He does it in the sixth inning of wild slugfest against Milwaukee Brewers reliever Valerio de los Santos.

Sammy’s homer is memorable, but it isn’t the most dramatic homer of the game. On a day the wind is blowing out, eight other players also hit roundtrippers; three for the Brewers and five for the Cubs.

Then, with runners on first and third, pinch hitter Orlando Merced comes to the plate. The Wrigley Field crowd senses that something big is about to happen. They are cheering before, during, and after Merced sends Wickman’s pitch into the Wrigley Field bleachers.

The win gives the Cubs a half game lead over the New York Mets in the hunt for the 1998 Wildcard.

September 10: In 1961, Lou Brock and Ken Hubbs both make their big league debuts, batting 1-2 in the lineup against Hall of Famer (and future Cub) Robin Roberts. Brock gets a single in his first at-bat, and Hubbs lines into a double play in his, wiping out Brock’s hit. The Cubs enter the 7th with a 6-1 lead, but lose to the Phillies 14-6… In 1971, Fergie Jenkins sets the Cubs single season strikeout record, but the Cubs lose in the 12th inning to the St. Louis Cardinals when Ted Simmons knocks in Joe Torre with a double.

September 11: In 1987, Ryne Sandberg, Leon Durham, and Keith Moreland all homer for the Cubs, as they beat the Expos 8-4…In 1989, Greg Maddux wins his 17th game of the season, a 4-3 victory over Montreal. Jerome Walton knocks in the game winner…In 1995, Kevin Foster does it all for the Cubs. He throws a five hitter, and goes 2 for 4 at the plate, driving in three runs, and even stealing a base against the Dodgers in a 12-1 victory.

September 12: In 1947, Peanuts Lowrey plays 3B, and knocks in two late runs to beat the Phillies 7 to 5… In 1989, Mike Bielecki throws a two-hitter…In 1998, the Cubs and Brewers play one of the wildest games in the ballpark’s history. The Cubs score five runs in the bottom of the ninth to win the game 15-12. Sammy Sosa hits his 60th homer of the season. (Full story above). In 2016, Kyle Hendricks loses no-hitter in 9th inning on a homer by Jeremy Hazelbaker. Cubs win 4-1.

September 14: In 1957, Ernie Banks hits three homers in a 7-3 Cubs victory over the Pirates…In 1965, Bob Hendley gets revenge on Sandy Koufax, in each of their first starts since the Koufax perfect game against the Cubs. Hendley beats the Dodgers 2-1 thanks to Billy Williams’ 2-run homer off Koufax in the 6th…In 1984, Rick Sutcliffe wins his 13th consecutive game.

September 15: In 2003, Matt Clement shuts down the Mets, and the Cubs move to only 1 ½ games behind the Houston Astros. Randall Simon knocks in two runs for the Cubs in the 4-1 victory…In 2016, Cubs lose to Brewers 5-4, but clinch the Central Division title thanks to Cardinals loss later that evening. Earliest division clinch by any team since 2008.

September 16: In 1972, the Cubs pound Tom Seaver and the Mets, 18-5. Cubs pitcher Burt Hooton leads the hit parade with a grand slam homer against the Hall of Famer. Billy Williams and Jose Cardenal (twice) also homer for the Cubs…In 2003, Mark Prior strikes out 13 batters, and the Cubs win 3-2. 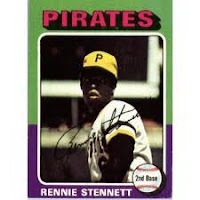 September 16, 1975
The Cubs are absolutely clobbered by the Pittsburgh Pirates.

Only three Cubs batters reach base all game against John Candeleria and two relievers. Meanwhile, Pirates lead off man Rennie Stennett sets a record by going 7 for 7. He scores five runs and drives in two more, but isn’t the only one to hammer the Cubs . Dave Parker knocks in five runs, Willie Stargell drives in three more, and Richie Hebner has three RBI too. The Pirates get 24 hits, 6 walks, and reach base three more times thanks to Cubs errors.

Five different Cubs pitchers are led to the slaughter that day, including both Reuschel brothers (Rick gave up 8 runs in the first). When the final out is mercifully recorded in the bottom of the ninth (a Pete LaCock groundout), the scoreboard reads: Pittsburgh Pirates 22 — Chicago Cubs 0.

The Pirates would go on to win the division that year, losing to eventual World Series Champion Cincinnati in the NLCS.

The Cubs finish in a last place tie with the Montreal Expos.