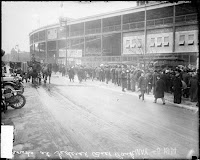 April 23, 1914.
One day after the Cubs drew the smallest Opening Day crowd in their history, a new ballpark opened on Addison & Clark. At the time, it was called “Weeghman Park”, and the team that played there was in the Federal League. This is how the Chicago Tribune described that first game:

“Chicago took the Federal League to its bosom and claimed it as a mother would claim a long lost child. With more more frills and enthusiasm than had prevailed at a baseball opening here Joe Tinker and his Chifeds made their debut before a throng of fans that filled the new north side park to capacity…It may not have been the largest crowd that ever saw an opening game in Chicago, but conservative estimators placed the attendance at about 21,000. The new park is said to have a seating capacity of 18,000…every seat in the place was taken, a great many were standing up in the back of the grandstand, and more than 2,000 were on the field in the circus seats placed there for the occasion.”

Weeghman Park didn’t have a second deck yet. That wouldn’t come for fifteen years. But it did have one feature that is quite common today…

“The windows and roofs of flat buildings across the way from the park were crowded with spectators. The surface and elevated trains leading to the north side were overhanging with people in the early afternoon and three or four separate and distinct automobile parades unloaded several thousand gaily decked rooters at the gates.”

And the Federal League Whales even had a number of players with Cub roots, and a few players that would later play for the Cubs. 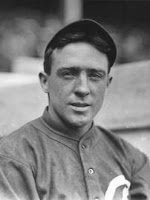 Joe Tinker (photo), as the Tribune mentioned, was the manager of the team. He was also the starting shortstop. Tinker was still revered in Chicago for being one third of the Tinker to Evers to Chance double play combination. The starting pitcher was Claude Hendrix. Hendrix would later pitch for the Cubs in the 1918 World Series, and would then be quietly banned from baseball for allegedly betting on a game in the 1920 season. The investigation of that game would unearth the Black Sox scandal. Rollie Zeider, the ChiFeds third baseman, would later play for the Cubs too. He has the distinction of having played for three different Chicago teams (he also played for the Sox). Catcher Art Wilson, and outfielders Dutch Zwilling and Max Flack also played for the Cubs in later seasons. In fact, Flack was the goat in the 1918 World Series against the Red Sox when he dropped an easy fly ball in the ninth inning to lose the game and the series.

But maybe the most important person with Cubs connections was Charles G. Williams. He had served more than twenty-five years in the front office of the Cubs. Williams, and owner Weeghman, had a pretty ingenious plan to attract fans. They went after an audience that heretofore hadn’t been so openly courted. They went after the ladies. The Tribune piece even pointed that out…

“The significant part of the affair to the new owners was the large number of women present.”

That remained a marketing quest even after Weeghman bought the Cubs, which he did in 1916.

April 23: In 1920 the Cubs won their home opener in the new christened “Cubs Park”. Original owner Charles Weeghman was no longer a part of the team, so the name was changed…In 1924, the home opener becomes the very first Cubs game broadcast on the radio. The radio station is WMAQ. The announcer is Hal Totten. He broadcasts from a small table on the roof. (The upper deck had not yet been built)…In 1966, Ferguson Jenkins made his Cubs debut. He got the win in relief over the Los Angeles Dodgers. Fellow future Hall of Famer Don Sutton took the loss.

April 24: Two incredible pitching performances took place on this date. In 1918, Cubs ace Hippo Vaughn pitched a one-hitter against the St. Louis Cardinals. Rogers Hornsby got the only hit of the game for St. Louis. In 1923 Vic Aldridge pitched a two-hitter against the same Cardinals team. One of those hits came from the opposing pitcher Jesse Haines.

April 25: Russ Meyer threw a one-hitter in 1948 against the St. Louis Cardinals. It wasn’t a shutout, however, because that one single was followed by two walks and a ground out. The Cubs still managed to win the game 3-1 in front of a Ladies Day crowd of 43,476.

April 26: In 1941, the Cubs become the first team to feature organ music in their ballpark… In 1970, Ron Santo hits a towering grand slam off Larry Dierker in the sixth inning to lead the Cubs to a 6-3 victory. Ferguson Jenkins got the win for the Cubs. In 1997, Ryne Sandberg breaks Joe Morgan’s HR record for second basemen in a 7-6 win over the Pirates.

April 27: In 1947 Johnny Schmitz pitches a shutout to beat the Cardinals 3-0. Bill Nicholson got the game winning hit for the Cubs in the fourth inning.

April 28: In his first of many outstanding pitching performances in 1945, Hank Wyse throws a one-hitter against the Pittsburgh Pirates at Wrigley Field. The Cubs win 6-0. Phil Cavarretta goes 3 for 3 and scores a run. In 1973, Rick Monday homers to lead off the game for the Cubs, and that’s all they need to win. Rick Reuschel wins the game 2-0.

April 29: In 1983, Lee Elia raves out in the locker room after another Cubs loss. In 1989 the conditions are terrible for the game against the Padres. It’s cold, wet, and windy. The two teams combine for eleven errors, five of them from future Hall of Fame second basemen Ryne Sandberg and Roberto Alomar. The Padres come out on top 5-4.

August 29, 1983
Lee Elia unleashed the most famous tirade in Cubs history, in the Cubs clubhouse. Les Grobstein of WLS radio was the only there recording.

It’s captured here in all it’s audio splendor, with bleeps.