*It’s unseasonably cold in Chicago. At night the temperatures are in the 40s. It feels more like April than June.

*Claude Passeau (photo) pitches a shutout against the Braves at Wrigley Field. Jim Tobin (a double) and Phil Masi (a single), get the only two hits.

*Cubs pitcher Jorge Comellas goes inexplicably AWOL, so the team options him to the minors.

*The Cubs enter June in 5th place, six and a half games behind the first place NY Giants.

*Tony Curtis (photo) turns 20 while serving in the Navy aboard the USS Proteus.

*Dennis Weaver celebrates his 21st birthday in the Navy too. He’s a pilot.

*Andy Griffith turns 19 on the same day as Marilyn. He is not posing for the troops. He’s a college student at the University of North Carolina.

*Marilyn Monroe turns 19. She is modeling for Yank Magazine (photo), to stir up the troops.

*Moe Howard turns 48. He has just produced his two favorite Three Stooges films, “You Natzy Spy” and “I’ll Never Heil Again.” Both were rare political commentary from the wacky Stooges, inspired in part, by their Jewish heritage. Howard’s real last name is Horowitz. 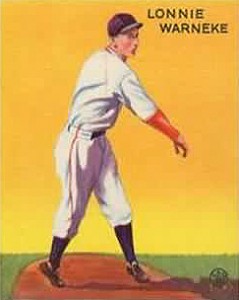 LON WARNEKE, known as the Arkansas Hummingbird, is training, getting his arm in shape for one last stint in the majors. He was a key member of the Cubs pitching rotation during the pennant winning seasons of 1932 and 1935 (he won two games in that World Series), but was traded to the Cardinals in 1936. His second Cubs stint began in 1942 and lasted through the 1943 season. His story is a common one during the war years–many ex-players saw an opportunity to return when so many players were in the military. Warneke did the same thing in 1945. He will pitch in nine games for the Cubs in September before officially calling it quits. After his playing career is over, he becomes a major league umpire.