*The Battle of Okinawa ends. Total loss of life—American, Japanese and Okinawan—exceeds 250,000.

*The Russians stage a Victory Parade in Red Square, Moscow.

*The United Nations charter is signed by 50 nations in San Francisco.

*The Tribune announces the only story that matters for Chicago’s school-age children: “Vacation Will Start tomorrow for 400,000 City School Pupils. More than 183,000 pupils already have been released from Catholic schools in the city.”

*PRICE CHECK: Toothpaste is 47 cents, and Vicks Vaporub is 59 cents.

*While the Cubs are beating the Pirates at Wrigley Field, they make a trade with their vanquished opponent, acquiring pitcher Ray Starr for cash. He has a 9.42 ERA at the time of the trade. He won’t do much better for the Cubs.

*The Cubs have dropped in the standings after a lackluster week. At the end of the week they are only three games over .500, in fifth place, six and half games behind the first place Dodgers.

*“A Bell for Adano” is released, starring Gene Tierney, William Bendix and John Hodiak. Here’s a scene from the film…

*“Rhapsody in Blue” is also released starring Robert Alda as George Gershwin. Al Jolson appears as himself in the movie. So does Oscar Levant. 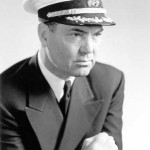 *Former Boxer Jack Dempsey turns 50. He is serving in the US Coast Guard, on the attack transport USS Arthur Middleton for the invasion of Okinawa.

*A baby is born in New York City to publishing magnate Richard L. Simon and his wife. Their daughter Carly will eventually make a name for herself too, especially after she meets someone who is so vain, he thinks her song is about him. 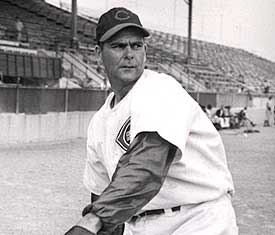 RAY STARR was another one of those wartime players. His first baseball career was in the early 30s. He had a cup of coffee with the Cardinals, Dodgers, and Braves in 1932 and 1933, but never made it back to the big leagues until the war offered him a second chance. He really took it too. Starr won 15 games for the Reds in 1942 and was such a horse they nicknamed him Iron Man. He won 11 more for them the following season. But the Iron Man was getting a little rusty. He was 39 when the Cubs acquired him this week in 1945, and was getting knocked around. The Cubs hoped a change of scenery might help him. It didn’t. He pitched in nine games for the Cubs, and registered an ERA of 7.43. His final appearance for the Cubs in September of 1945 was also the final appearance of his career. Ray Starr passed away in 1963 at the age of 56.