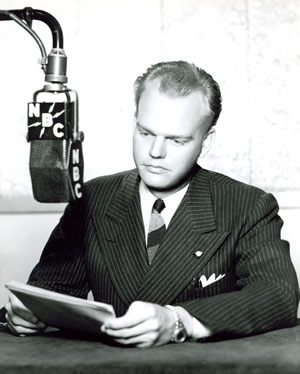 *What had once been the NBC Blue Network officially becomes known as ABC under its new owner, Edward J. Noble (who had bought it in 1943 and operated it as the “Blue Network” till now). Among their most popular shows… the Jergen’s Journal with Walter Winchell. Their affiliate in Chicago is WENR Chicago. Among WENR’s brand new employees: Paul Harvey.

*The Cubs are surging. They sweep a series in Cincinnati, then return home to Wrigley and beat the Pirates twice. Claude Passeau wins his 5th and 6th games of the year during the streak.

*After their five game winning streak, the Cubs are tied for second place with the Cardinals, 3 1/2 games behind the Brooklyn Dodgers. The Giants have suddenly dropped a game behind the Cubs and Cardinals, after a very bad week.

*Judy Garland (23) marries director Vincente Minnelli (her second husband). He just directed her in the film “The Clock.” 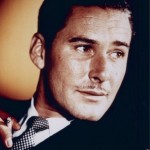 *Actor Errol Flynn celebrates his 36th birthday in Hollywood. He isn’t serving in the war, but he is making films about it. His movie “Operation Burma” comes out in 1945, and is a big hit. Though Flynn is criticized for portraying a war hero while never actually serving, he did try to enlist in all of the branches, but was rejected for health reasons.

*Stan Laurel turns 55. He has just been diagnosed with diabetes. Oliver Hardy makes two films without him while Laurel recovers.

*Paul McCartney (in Liverpool) and Brian Wilson (in California) both turn 3.

*Do you really believe in astrology? Future singer Anne Murray and future UFO radio star Art Bell are both born this week.

Clyde McCullough was so notoriously “dim” behind the plate one of his teammates said: “We used to swear he had to put his head down and see how many fingers he was putting down!” But Clyde also had a rocket arm, and he contributed with the bat.

Sadly, he wasn’t available during the 1945 season because he was in the service. He had missed all of 1944 too. The Armed Services released him just in time to be added to the World Series roster. After not playing for two full seasons he was a little rusty, but Charlie Grimm did manage to get big Clyde one World Series at-bat, making him the only player to have appeared in a World Series without playing a regular-season game in the same year.