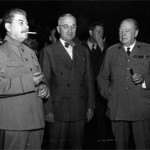 *At Potsdam, the three main Allied leaders begin their final summit of the war (meeting ends August 2). Truman informs Churchill that the July 16th nuclear test has been successful in a note that reads, ‘Baby satisfactorily born.’

*London’s West End is lit once again, ending over 2,000 nights of blackouts and dim-outs.

*The Trinity Test, the first of an atomic bomb, using about six kilograms of plutonium, succeeds in unleashing an explosion equivalent to that of 19 kilotons of TNT.

*1000 airplanes take off from aircraft carriers in the Pacific to bombard the port of Hokkaido in Japan. 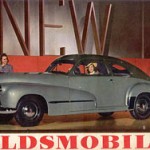 *The 1946 Oldsmobiles hit the showrooms of Chicago, the first new cars since the war began. The new Olds incorporates several changes from the 1942 models whose production was halted by the war, including a new type of radiator grille.

*PRICE CHECK: Newspapers are a nickel. A phonograph is $9 (45 RPM doesn’t exist yet). 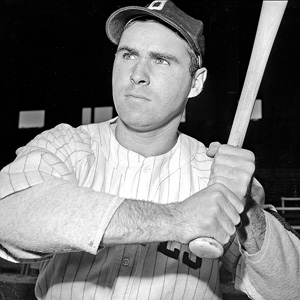 *The Cubs stop the longest hitting streak in NL history (to date). Tommy Holmes of the Boston Braves had hit in 37 straight games. (AP Photo). That will remain a record until Pete Rose hits in 44 consecutive games in 1978.

*The Cubs are still on a hot streak. They have now won 18 of their last 22 games and are comfortably in first place.

*“The Story of GI Joe” debuts July 13. The movie stars Robert Mitchum (who was nominated for an Academy Award) and tells the story of war correspondent Ernie Pyle (played by Burgess Meredith). Pyle was instrumental in the making of the movie, but isn’t alive when it comes out. He was killed in action a few weeks earlier.

*Anchors Aweigh” is released in US, featuring 4F superstar Frank Sinatra and US Naval Air Service Lt. Gene Kelly. It becomes the 5th biggest hit of the year and gets Gene Kelly his only Oscar nomination.

*Future astronaut John Glenn turns 24. He is serving in the US Marine Corp as a pilot, and will fly 59 combat missions in the South Pacific.

Cub of the week: AL GLOSSUP
The Cubs acquired Al Glossup in September of 1943. He previously had a cup of coffee with the Giants, Phillies and Dodgers before the Cubs got him, and they were going to give him a shot at cracking the lineup in 1944. Before he could get a single at-bat in a Cubs uniform, he was drafted into the US Navy. He served at nearby Great Lakes Naval base during ’44, before being sent on the Navy’s Western Pacific tour with the Fifth Fleet team in 1945. He was assigned to Saipan after the tour, and was discharged from the Navy in December of 1945. He returned to the Cubs the following year, but only managed ten at-bats before being sent down to the minors. He never returned to the big leagues.