This Week, the Last Year the Cubs Were In the World Series 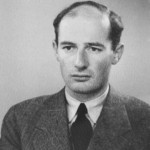 *Swedish diplomat Raoul Wallenberg (photo), credited with saving tens of thousands of Jews from the Nazis, is arrested by the secret police in Hungary.

*Chicago 23rd ward alderman Jake Arvey is serving as a colonel in the US Army in the Pacific, a judge advocate of the 33rd Infantry.

*Cubs pitcher Bill Fleming reports for military service. He won nine games for the Cubs in 1944 pitching as a starter and reliever. The 1945 Cubs will miss him.

*“Tonight and Every Night” starring Rita Hayworth is released. (Watch a scene from the film here)

January 13: Robert Stack is serving in the Navy on his 26th birthday as a gunnery instructor.

January 13: Andy Rooney (photo) celebrates his 26th birthday the same day, and is also serving in the Army as a reporter for the Stars & Stripes. Rooney will be on hand to witness the liberation of German concentration camps in a few months.

January 16: Francis George is an altar boy in Chicago. He turns 8 this week.

January 17: Al Capone has been released from prison for extreme syphilitic symptoms, so it’s not clear if he understands that his 46th birthday is this week. He is living in Florida. 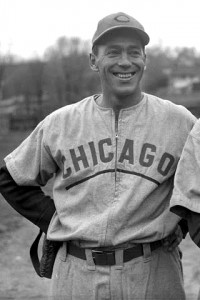 Roy Hughes completed one of the all-time great comebacks to be a part of the Cubs in 1944. He played for the Indians, Browns and Phillies from 1935-1940, but was injured badly in a collision at second base in 1940. The doctors told him that he had to give up the game. While he was working around the house, he was injured again in a tar explosion. But this time, the tar somehow rebuilt the previously injured muscles, and he was suddenly able to play baseball again. He had a great comeback year with the Cubs in ’44 (at age 33), hitting .287, and stealing 16 bases (third in the league). He relinquished the starting 3B job when Stan Hack un-retired, but he was still an important backup infielder.

As he prepares for 1945, Hughes is tending to his dying father. He already informed the team that he may not be able to make it to spring training.