*The depth of the destruction in Japan is slowly seeping out. From the New York Times: “30,000 MORE DIE SLOW DEATH IN HIROSHIMA: JAPS – Report Many Sufferers Cry, ‘Kill Me’: Tokyo broadcasts said yesterday that “radioactivity” and burns from the atomic bomb at Hiroshima claimed the lives of 30,000 persons within two weeks after the bomb was dropped, and that some burn victims asked to be killed to end their pain.”

*President Truman addresses it: “The atomic bomb is too dangerous to be loose in a lawless world. That is why Great Britain, Canada and the United States, who have the secret of its production, do not intend to reveal that secret until means have been found to control the bomb so as to protect ourselves and the rest of the world from the danger of total destruction.”

*Some of the war rationing ends. From the Tribune: “Curbs Lifted on Towels and Leather Items: All wartime controls on production of bath towels in all sizes and weights for civilian use were removed today by the war production board.”

*PRICE CHECK: Large White Eggs are 69 Cents per dozen, Leg of Lamb is 59 cents per pound.

*Jackie Robinson meets with Branch Rickey in Brooklyn where Rickey gives Robinson a “test” by berating him and shouting racial epithets of the sort that Robinson would likely hear. Having passed the test, Robinson signs the contract which stipulates that from then on, Robinson has no “written or moral obligations” to any other club. Robinson was discharged from the military in Nov ’44, and is playing for the Kansas City Monarchs of the Negro Leagues.

*Cleveland ace Bob Feller returns from Navy and strike out 12.

*St. Louis beats the Cubs again, completing a three game sweep. The Cubs lead over the Cardinals is down to 2 ½ games. (The Cubs only win 6 of their 22 games against the Cardinals in 1945) 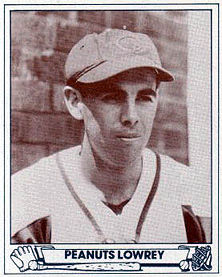 Cub of the week: PEANUTS LOWREY
His real name was Harry Lee Lowrey, but he was known as Peanuts. His nickname stemmed from the fact that his grandfather described him as “no bigger than a peanut.” He was also a child actor, playing bit parts in silent films, and actress Thelma Todd got him to perform with promises to buy him peanuts.

Peanuts played with the Cubs from 1942-1949, and was one of the best players on the pennant winners in 1945, but he never totally lost the acting bug. He also had a speaking part in “The Winning Team,” which starred Ronald Reagan as Grover Cleveland Alexander. His character in that movie is the one that hits Grover Cleveland in the head with a baseball.

Lowrey’s Cubs career ended in 1949 when the outfielder was traded to the Reds for Hank Sauer; one of the best trades in Cubs history.