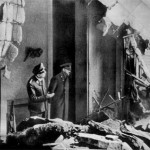 *Adolph Hitler turns 56 years old in his Berlin bunker. He can already hear the gunfire above ground. His world is closing in on him. When he investigates the wreckage above ground, even he starts to see the end is near. His birthday, a day that had been celebrated as a national holiday for the past few years, will not even be celebrated by Hitler himself.

*Retreating German troops destroy all the bridges over the Adige in Verona, including the historical Ponte di Castelvecchio and Ponte Pietra.

*Heinrich Himmler, through Count Bernadotte, puts forth an offer of German surrender to the Western Allies, but not the Soviet Union. It is rejected. 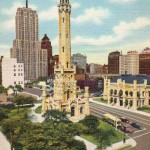 *The third tallest building in town is the Palmolive Building (919 N. Michigan Avenue). It will later become known as the Playboy building. (That’s it in the background in this postcard from the era, behind the Water Tower)

*The Cubs are off to a good start. Their first road trip (to Pittsburgh and Cincinnati) is behind them, and despite a few rainouts, they finish this first week of the season with a 5-2 record. They are in second place behind the Giants. In what has to be the most exciting news of the week, ailing Cubs pitcher Claude Passeau declares himself ready to go. He tosses a 5-hit shutout in his first start, and hits a home run to beat the Reds 4-0. Another Cubs pitcher, Paul Derringer (photo), is named National League player of the week. 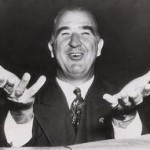 *Senator Albert B “Happy” Chandler (photo) is named 2nd baseball commissioner. For the time being he will do both jobs, Senator and Commissioner.

*The Boston Braves are making do this season without star pitcher Warren Spahn. He’s serving in the military this week as he celebrates his 24th birthday.

*The Toronto Maple Leafs beat the Detroit Red Wings, 4 games to 3, to win the Stanley Cup.

*“Blood on the Sun” is released starring James Cagney and introducing a young Hugh Beaumont.

*Eddie Albert is a genuine war hero serving in the Navy. He turns 37 years old this week.

*Jack Ruby, a Cubs fan and future Lee Harvey Oswald hit man, is serving stateside in the Army as a mechanic. This week is his 35th birthday.

*Bjorn Ulvaeus is born in Sweden. He will become one of the Bs in ABBA.

*Al Pacino celebrates his 5th birthday in the South Bronx.

Don Johnson is the starting second baseman for the Cubs. He was a young phenom in the minor league system, and the Cubs thought so highly of his eventual development, they traded their Hall of Fame second sacker Billy Herman. Then, they traded the other second baseman on their team, future all-star Eddie Stanky, and gave the job to Johnson. In 1944, Johnson was an all-star himself, leading all 2B with 71 RBI. He also, unfortunately, committed 44 errors. Johnson has another all-star season with the bat in 1945, hitting .302, but after the players return from the war in 1946, he is exposed as a liability. Johnson becomes a non-factor in 1947 and 1948 (his last season in the big leagues) while Eddie Stanky leads two different teams to the NL pennant.

Some Don Johnson trivia: His father Ernie also had a Chicago connection. He was signed by the Chicago White Sox to replace banned shortstop Swede Risberg after the Black Sox scandal, and remained in the big leagues for ten years. In 1925, exactly twenty years before his son would play in the World Series, Ernie Johnson played in the World Series for the New York Yankees.