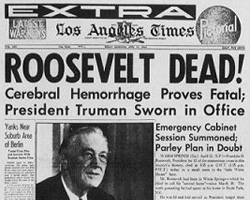 *But it rages on without the American president. On the afternoon of April 12, Franklin Delano Roosevelt is in Warm Springs Georgia. He says, “I have a terrific pain in the back of my head.” He then slumps forward in his chair, unconscious, and is carried into his bedroom. The president’s attending cardiologist, Dr. Howard Bruenn, diagnoses a massive cerebral hemorrhage (stroke). At 3:35 p.m., Roosevelt dies.

*Franklin D. Roosevelt is buried on the grounds of his Hyde Park home in New York. 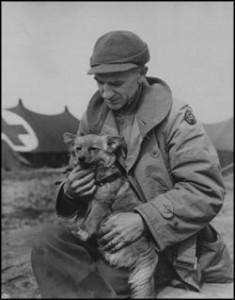 *Meanwhile, in the Pacific, America suffers another devastating loss. Ernie Pyle (photo), the American journalist chronicling the war, is killed by Japanese machine gun fire on the island of Ie Shima off Okinawa.

*And in Germany, the Red Army begins the Battle of Berlin, and U.S. troops enter Nuremberg. They are closing in on Hitler from every direction.

*The city is mourning the loss of their President, although not everyone is so shaken up. Colonel Robert R. McCormick, the publisher of the Chicago Tribune, hated Roosevelt’s guts. His paper had called The New Deal “Communism.” It was opposed to the war–a leader of the “America First” movement. They also kept a countdown of the number of days until Roosevelt’s term was over. Despite this, the Tribune did manage to be respectful the day FDR died. Only one headline hinted at the Colonel’s true feelings. Here are the headlines in his Chicago Tribune…

*As the headlines in the Tribune indicate, the Cubs and White Sox are in the midst of a crosstown exhibition series. Just like clockwork, the unseasonably warm weather left town as soon as our baseball teams arrived. It is frigid on April 12th when they play the first game of the series at Comiskey Park. Only 2200 or so fans showed up to watch the Cubs crush the White Sox 15-3. The rest of the series is canceled because of President Roosevelt’s death.

*Opening day for the Cubs arrives on April 17th. They face their strongest rival, the St. Louis Cardinals. The Cubs win 3-2 at Wrigley Field in front of 11,785 fans at Wrigley, thanks to a walk-off single by second baseman Don Johnson in the bottom of the ninth. Bill Nicholson homers too. The game is played in honor of Franklin D. Roosevelt, who had thrown out the first pitch at Wrigley Field during the 1932 World Series.

*The Cubs are surprised by an arrival in the clubhouse before the game: holdout outfielder Peanuts Lowrey. Charlie Grimm, still angry about the holdout, tells Lowrey that he won’t just be given his starting job back– but his anger doesn’t last long. Lowrey will start for most of the 1945 season.

*In St. Louis, one armed outfielder Pete Gray plays his first game for the St. Louis Browns. He goes 1 for 4.

*“A medal for Benny” starring Dorothy Lamour is released April 16. John Steinbeck wrote the screenplay and will be nominated for an Academy Award. 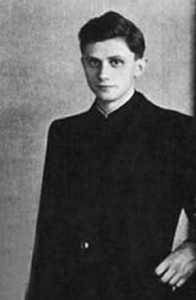 *William Holden turns 27. He is serving in the Army making training films

*Harold Washington celebrates his 23rd birthday while serving in a segregated unit of the Air Force in the Phillipines. He and his unit are building runways.

*Rod Steiger’s 20th birthday finds him serving as a torpedoman in the US Navy in the Pacific.

*Herbie Hancock turns 5. He is already considered a child prodigy, and lives in Chicago. 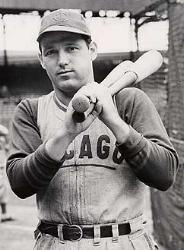 Bill Nicholson is the most feared slugger in the National League. He is coming off an MVP-caliber season in 1944, in which he led the league in HR and RBI, and came only one vote short of winning the MVP Award. He was so feared in 1944, that one game against the Giants, after he had hit home runs in his previous four at-bats, he was intentionally walked with the bases loaded.

He doesn’t know it yet, but 1945 will be the beginning of the end for him. His eyesight is going because he has diabetes, and it won’t be diagnosed for awhile. It also affects his swing. He can no longer hit the high heat. Leo Durocher, manager of the Dodgers, tells his team that anyone who pitches him waist down will be fined.

Nicholson is the starting right fielder for the Cubs in 1945, and hits a homer opening day, but he will finish the year with only 13 home runs and 88 RBI, a far cry from his glory days (1940-1944). He will remain a Cub, however, for another three seasons after this. They eventually ship him out to Philadelphia, who converts him into a pinch hitter. He retires after the 1952 season.