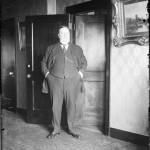 Republican presidential nominee William H. Taft turns 51 (Sept 15). He is the hand-picked successor of Teddy Roosevelt, having served as his Secretary of War. The Republicans nominated him in June, and the Democrats nominated William Jennings Bryan to oppose him. Taft is from Ohio, but because his half-brother is one of the co-owners of the Chicago Cubs, he follows the team closely. He attended at least three Cubs games with his brother. One time the game was even rescheduled just so that he could attend. Of course, Taft will go on to win the election in 1908. He still holds the record for being the heaviest President of all time. After his presidency, he will also become the only former President to be named to the United States Supreme Court.

*The wrecking ball (Sept 15) takes down old City Hall. The new (and still functioning) City Hall will be finished in 1911. 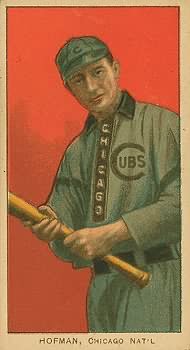 *Because the upcoming series with the New York Giants will probably decide the pennant, manager Frank Chance orders Solly Hofman to put off his planned marriage. Says Hofman: “I guess Miss Looker and I can wait. She’s as anxious to have the Cubs win as I am.”

*The trip to Philadelphia doesn’t go well for the Cubs. They lose 2-1 in ten innings on the 16th, which drops them 4 ½ games back, then they play another extra inning game the next day, which is called because of darkness with the score tied zero-to-zero.

*Cubs outfielder Frank Wildfire Schulte celebrates his 26th birthday (Sept 17). Schulte had a thing for hairpins. He thought they were good luck, so he would search the streets looking for hairpins. The bigger the hairpin, the better the luck. He would be the last key member of the Cubs dynasty to leave the team. He starred for them until the middle of the 1916 season, when he was traded to Pittsburgh. He only played two more years, and retired after the 1918 season.

In other news this week 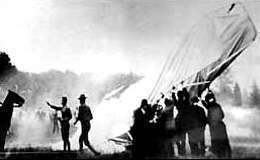 *On September 17th, Army lieutenant Thomas Selfridge rides along with Orville Wright as his passenger, serving as an official observer for the U.S. Military. A few minutes into the flight a propeller splits and shatters, causing the plane to crash. Selfridge suffers a fractured skull in the crash and dies. He becomes the first fatality of an airplane crash. Orville is badly injured, but survives.

*Brigadier General John J. Pershing, nicknamed “Nigger Jack” during his days teaching at West Point, turns 48 while serving as a military observer in the Balkans. He will later lead the American forces in World War 1.

Maybe there is something to this Zodiac thing. Three of the most famous authors in the world celebrate a birthday this week…

*Upton Sinclair turns 30 (Sept 20). He is well-known for his groundbreaking novel “The Jungle,” which was released five years earlier. He currently lives in Delaware amongst a group of “free-thinking socialists” and does his writing in a tree-house behind his home.

*Author HG Wells turns 42 (Sept 21). He is world famous for his science fiction novels “The Time Machine”, “The Isle of Dr. Morneau,” “The Invisible Man,” “War of the Worlds,” and more. His science fiction days are behind him now, and he’s writing more “socially aware” material in England. It isn’t nearly as successful.

*Agatha Mary Clarissa Miller’s birthday is this week too. She turns 18 (Sept 15). In six years she’ll marry a man named Christie, and writing under her married name, Agatha Christie will become the biggest selling author of all-time.

If you travel back in time, don’t chastise someone for ignoring the manners espoused by Emily Post, no one will know what you’re talking about. Her first book won’t come out until 1922