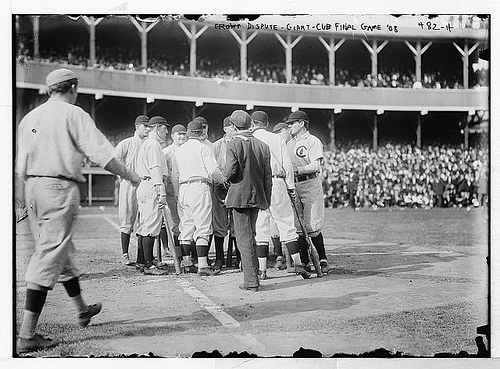 The Cubs and Giants end the season tied. A one game playoff between Cubs and Giants will decide the pennant: The replayed Merkle game (Oct 8) in New York at the Polo Grounds.

The doors open at 11:00, and tickets are available on a first come, first serve basis. There are five thousand waiting at the ticket windows when they open. The game is sold out by noon. Gates are closed at 12:45, and the fans are not happy about it.

10,000 fans tear down a fence to get into the ballpark. They are set back by police with firehoses. Henry Taft, minority owner of the Cubs, and brother of the future President, sneaks into the ballpark via a sewer (according to a Mordecai Brown biography released in 1910).

Christy Mathewson, the future hall of famer for the Giants, arrives at the park saying that his arm feels dead, but he’ll pitch anyway. The umpires are each bribed $5000 to throw the game by someone on the Giants (reading between the lines, it was probably their catcher Bresnahan and the manager McGraw). The umps refuse, but report it to the league office (which does nothing about it).

Trading on Wall Street is sharply down because so many people are trying to see the game. In Chicago, Orchestra Hall is opened to the public, and a big scoreboard is on the stage. More than 2500 Cubs fans fill the Hall.

Before the game, Giants manager McGraw (photo) sends Joe McGinnity over to taunt Frank Chance, and possibly start a fight that would get him thrown out of the game. It doesn’t work. In return, Frank Chance assigns every Cubs player one Giants player to taunt and call names. They do it happily. The Giants and Cubs hate each other’s guts.

The Cubs win the game 4-2. Mordecai Brown pitches 8 1/3 innings of relief. When the game is over, the Cubs have to run for their lives from the angry NY fans. Chance is attacked, his neck cartilage torn. Tinker, Sheckard and Howard are hit with flying debris. Jack Pfiester’s shoulder is slashed. Evers gets away untouched. An Irish gang was hired to protect him (by his cousin). The next day they get death threats at their hotel—someone says their train back to Chicago will blow up.

*Juan Peron turns 13 in Argentina (Oct 8). He will grow up to become the 41st president of Argentina just after World War II and serve three terms in office. His wife Eva will later extol the nation not to cry for her.

*Eleanor Roosevelt turns 22 (Oct 11). She is a young wife and mother, and is deeply unhappy in her role.

*Jane Alice Peters is born (Oct 6) in Fort Wayne, Indiana. She will later adopt the name Carole Lombard, become a movie star, marry movie stars William Powell and Clark Gable, and die in a plane crash at the tender age of 33.

Price Check: A box of 100 cartridges for black powder 22-caliber pistol is 21 cents.* (*Cannot be sent in the mail)

If you travel back in time, and the silverware looks a little different, there’s a good reason for that. Stainless steel cutlery won’t be invented until 1921.