He and his Broadway troupe perform for Frank Chance, Joe Tinker, Harry Steinfeldt, Del Howard, Jimmy Sheckard and their wives, plus Johnny Evers and Pat Moran. Then after the show, they have dinner and drinks until the wee hours.

Not invited to the dinner? Cubs owner Charles Murphy.

Murphy reads about the dinner the next day in the Chicago Tribune and is livid that he wasn’t invited. He never forgets this slight.

*“Take Me Out to the Ballgame” by Billy Murray hits the charts. (Oct 24) This song is written by Albert Von Tilzer (photo) and Jack Norworth, two gentlemen who notoriously have never attended a baseball game, and reportedly wrote the song in about an hour. It reaches the top of the charts next week and stays there for seven weeks. (That song is now the third most performed song in America behind only “Happy Birthday” and the National Anthem.)

*Cubs backup outfielder Jack Hayden turns 28 (Oct 21). He got in a grand total of 11 games for the Cubs this year, the last eleven games of his major league career.

*Columbia Records puts out the very first double-sided phonograph discs. Among the selections, a recording by the Chicago Symphony Orchestra. 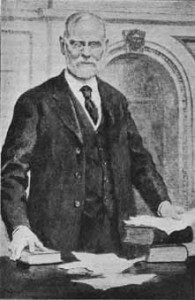 *Hyde Park congressman James R. Mann (photo) is home visiting his district. He will soon become a nationally known political figure for sponsoring and passing the Mann Act, which at the time is known as the “White Slavery Act.” (50 years later that law will ensnare musician Chuck Berry)

*Jerome Horwitz turns 5 in New York (October 22). He is still popular today, but is better known by his stage name: Curly Howard.

^Pablo Picasso turns 27 years old in the Montmartre quarter of Paris (Oct 25). His paintings from this time are known as his “Rose period.”

*Bela Lugosi celebrates his 26th birthday in Austria-Hungary (in what is now Romania.) He is already a stage actor, and will move to film in 1917.

If you travel back in time, and you want to buy a phonograph, go ahead, but it will look and feel very different. Acetate won’t be invented until 1927.