The 1907 Championship flag is raised amid great fanfare at West Side Grounds in front of sold out crowd. Cubs owner Charles Murphy thinks it’s a bad omen when the flag gets stuck halfway up the flagpole. A who’s who of Chicago society is attending the game. The first pitch was thrown from the upper box by Chicago Mayor Fred Busse. Cubs stud starter Orval Overall doesn’t live up to the moment, unfortunately. He is rocked early and often. The Cubs lose 11-3 to the Boston Braves. 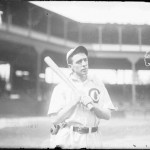 ~Joe Tinker (photo) hits the ball out of the park to win the game for the Cubs against the hated New York Giants 8-7. For the week the Cubs go 4-2 and remain in first place with a record of 19-9.

~Jack Pfiester, a member of the Cubs starting rotation, celebrates his 30th birthday (May 24). By the time he turns 33, his career will be over.

~A little known baseball player named Carl Spongeberg celebrates his 24th birthday (May 21). He doesn’t know that he will get his only shot at the majors later this summer—he’ll pitch seven innings for the Cubs. 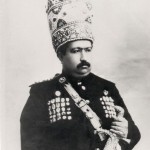 ~Oil is discovered in the Middle East for the very first time (May 26) in Persia. The British somehow own the oil. (Photo: Mohammed Ali Shah of Persia.) The people of 1908 carry on completely unaware that the world has changed forever.

~In England, Sir Arthur Conan Doyle is still alive. He is one of the most famous men in the world, and turns 49 years old. Meanwhile, little Larry Olivier is unknown and celebrating his first birthday (both on May 22).

~A little baby born this week in Indiana, Pennsylvania named Jimmy Stewart will one day become one of the most beloved film stars of all-time.

~A little Italian baby named Sam Giancana is born four days later on May 24 in the Little Italy neighborhood of Chicago.

Price Check: “The Kenwood Agricultural Boiler can be used to render lard, cook food for stock, boil sap, or melt lead. The 170 pound 15 gallon boiler is only $7.88.”

If you travel back in time, and your hair starts reverting to it’s natural color, get used to it. Reliable hair dye won’t exist until 1909.