*Alexander Graham Bell turns 61 (March 3), and is one of the most famous men in America–known as the inventor of the telephone. Now he is experimenting with aviation. He and his aviation team are working very hard on preparing his aeroplane “Red Wing”. It will make the first American public flight next week (March 12) in Hammondsport, New York. The photo is a postcard of that historic flight. (Postcards are a particularly popular way of publicizing events in 1908) 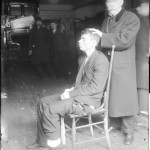 It is a very tense time in Chicago. The anarchist movement is strong and organized. The police are attempting to protect the God-fearing Chicagoans by staking out churches every Sunday. They spend the rest of the week breaking up worker rallies where the anarchists are most likely to appear. In the midst of this turmoil, a high profile murder shakes the city: a dead body is found in the home of the Superintendent of Police, George Shippy. Lazarus Averbuch, an alleged anarchist, was supposedly attempting to assassinate the Police Superintendent. Shippy’s son Harry was wounded in the attack, and Supt. Shippy claims to have shot the man in self defense. There are a lot of problems with his story, and the forensic evidence doesn’t seem to match up, but Shippy is portrayed as a hero in the Chicago papers. They splash this photo of Averbuch’s dead body, propped up in a chair by Police Captain Evans, all over the front pages. Police Superintendent Shippy died only three years later…of syphilis. (Photo is from the Daily News collection at the Chicago Historical Society.)

~ A crazed fan throws a brick through a train carrying the Cleveland Naps to training camp, injuring several players (March 3)

~The Cubs have a mishap on the way to spring training too. Frank Chance is late arriving at the train depot, and has to hop on the train while it’s moving. He leaves his suitcases behind, including the one with the team uniforms.

~Knute Rockne turns 20 (March 4). He is working as a laboratory assistant to noted polymer chemist Julius Arthur Nieuwland and won’t become the head football coach of Notre Dame for another ten years.

~A baby boy is born in a suburb of Liverpool, England (March 5). The young lad, Reginald Carey Harrison, will later go by the first name of Rex and become an Academy Award winning actor.

~Louis Francis Cristillo turns 2 in Patterson, New Jersey (March 6). He would become a stunt man in silent movies before turning his attention to comedy. In the early 30s he changes his name to Lou Costello, and teams up with a straight man named Bud Abbott.

If you travel back in time, don’t ask someone to sing the National Anthem. It won’t be called that until 1931. From 1931-1942 it will only be played at baseball games on special occasions. Not until after the United States becomes involved in World War II, will it become a regular part of the ballpark routine.